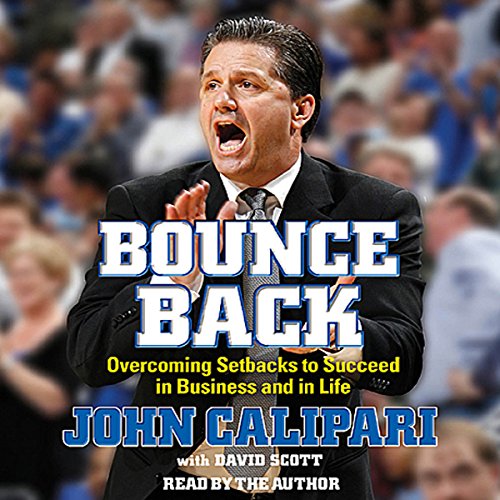 Job loss. Foreclosure. Relationship woes. Health issues. Dire financial straits. If recent history has taught us anything, it's that nobody goes through life unscathed -- no matter how rich, how smart, how talented, or how fortunate they may be. White collar, blue collar, or no collar, there is an undeniable commonality to the raw emotion that strikes people when they are knocked down.

University of Kentucky basketball coach John Calipari has seen the bottom - from two very distinct and very public setbacks -- but he has learned that bad situations are only permanent if you allow them to be. Fired from his job as head coach 20 games into his third season with the NBA's New Jersey Nets in 1999, Calipari was publicly humiliated and emotionally devastated. But Calipari never allowed the negative to overcome him or those around him, and he began plotting a course for his first bounce back. It was a journey that took him to the University of Memphis and, in 2008, to the NCAA's marquee event, the men's basketball Final Four.

When that trip culminated in a crushing, overtime defeat in the title game, Calipari began to bounce back again -- this time armed with the knowledge and fortitude he gained in overcoming the Nets' firing. One year after that defeat, from where he watched his team lose a nine-point lead with two minutes and twelve seconds left in regulation, Calipari was tabbed as the head coach of college basketball's all-time winningest program, the University of Kentucky Wildcats. In ten years, he went from his lowest low to landing his dream job at a dream program.

"Whether in sports or in life, you have to know how to bounce back. In this book, Coach Cal gives you a blueprint for overcoming life's setbacks." (2008-09 NBA Most Valuable Player LeBron James, Cleveland Cavaliers)
"If you don't have to bounce back from a perceived failure at some time in your life, you lie about other things too! Given today's economic times, we're all bouncing back in some way. Let Coach Calipari guide you through your bounce back. I'm a big Coach Cal fan and this is a must-read." (Ken Blanchard, bestselling author of The One Minute Manager )
"Perhaps the ultimate challenge in sports is how you bounce back when you've been knocked down. John Calipari might be the best ever at responding to such adversity." (Bob Rotella, bestselling author of Life Is Not A Game of Perfect)

What listeners say about Bounce Back

good for a bounce back

good game plan. quick listen, but tough. I'd recommend if you were changing careers or looking to embark on a new journey after rejection