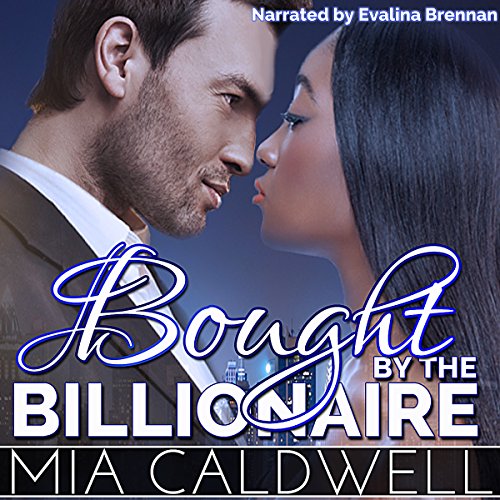 Bought by the Billionaire

By: Mia Caldwell
Narrated by: Evalina Brennan
Try for $0.00

Does everyone really have a price?

Broke, working two jobs, and barely holding it together, the last thing Keela Goodwin needs is another problem. Her latest crisis comes in the form of Simon Magnus, the sexy billionaire whose Ferrari she just rear-ended. Without insurance, she isn't sure how to settle the debt. He has an unorthodox proposition that Keela soundly rejects. Simon wants her, and he gets what he wants, but she intends to show him she is one thing that can't be bought by the billionaire.

A standalone story with no cliffhangers.

(This is a modified and expanded version of a story previously published with a different title.)

What listeners say about Bought by the Billionaire

SOME MAYBE A FEW DATES

Would you ever listen to anything by Mia Caldwell again?

What character would you cut from Bought by the Billionaire?

ENJOYED THE BOOK. THEY MADE A HAPPY COUPLE

The story is mediocre at best buy the narrator just totally killed it! She has absolutely the wrong voice inflections or at times none at all!! I'm so happy that this was only $3.00.

An accident starts an interesting pursuit with a sweet ending.Wish it was a little longer & a more romantic first time. But AUDIBLE BWWM with girls of a darker hue are rare jems I grab. I'm thankful.

This was a very enjoyable short story. Keela hits Simon’s expensive car while not paying attention. She is totally broke. Simon wants Keela almost as soon as he sees her and he pursues her. Keela was going to file for bankruptcy but Simon paid off all of her debt and she was not happy about that. He pursued her until he finally got her. Evalina Brennan did a very good job with the narration. I received this free copy audiobook at my request and have voluntarily left this review.

This book was so bad, it moves way to quickly and has no depth. Don't waste your money.

The beginning of something great

I loved the idea of this story. I felt like I just listened to a plot idea for a book. The bones are there, I just needed some meat. The narrator didn’t feel right to me for the character at all.

Great book, kept my attention all the way to the end, amazing audio delivery, loved it.

The story stayed of with a girltaking a strange for something she believed in and quickly devolved into something typical. Sex is the first step to any relationship. Virginity is to be given to the first guy that shows appreciation for your body and rich guess get what they want. I understand that it is a short story, and a lot had to be done in that short story. But and they could have at least made the girl hold out for marriage. For her to give it up saying that she was looking for "it", just sounds trivial. And then to have the happy ending of I had sex with you and now I want to marry you and take care of you for your life, it just screams unrealistic and trash. I feel like I wasted my $3.

Really difficult to get through

I had to skip a few parts to be honest. The story is clichéd and dull, with no character development at all. The narration is really bad (particularly the distractingly awful English accent) as she seems to be trying to make every sentence sound seductive, even the parts that are describing everyday actions. This is a quick listen, but still not worth the time.