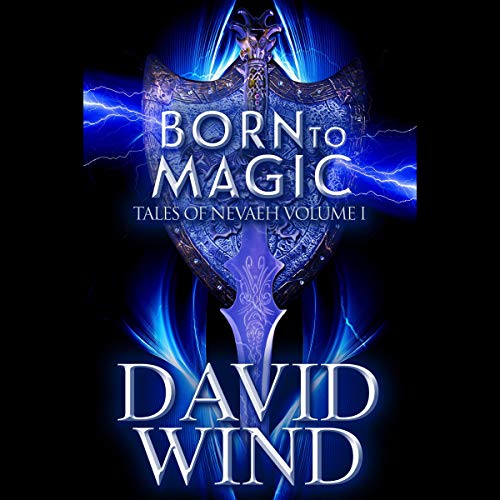 By: David Wind
Narrated by: Helene McCardle
Try for $0.00

What would you do if you were 18 and told the future of the world is in your hands?

Three thousand years after America is destroyed by nuclear war, the inhabitants have evolved, embracing magic and metaphysical warfare. As enemies from across the seas begin to close in, ancient legends come alive, leaving no one safe. The only two who can stop the onset of the darkest evil is the sorceress, Areenna, and Mikaal, the son of the High King of Neveah. With the safety of the world in their hands, and their powers young and erratic, will Mikaal and Areenna find the courage and strength to overcome the impossible, or....

An international best seller, Born to Magic is the first book in the Tales of Nevaeh series. A mix between Shannara Chronicles by Terry Brooks and The Hundred Series by Kass Morgan, Born to Magic combines futuristic dystopian societies ruled by magic and metaphysical elements with science fiction. The inhabitants aren't aware that looming just outside the atmosphere, orbits the key to their past. Teens, young adults, and adults alike will love this fantasy.

What listeners say about Born to Magic

TARGET AUDIENCE: Anyone who loves fantasy. This book immediately grabs your attention with a unique story line. Good for any age.

PROFANITY AND SEX: None, Thank you. Absolutely going to recommend to my teens and adult children.

STORY LINE: Takes place in the 53rd century in a post-apocalyptic world. Radiation has caused unusual mutations throughout the earth’s population. Although this is the first in several books, the end is fulfilling. Recommend reading the prequel Prelude to Nevaeh: Roth's Story. He truly makes the story line believable. The story line is well developed, and if you were to leave the book for a while, and then return you could pick up right where you left off. He does a really good job at describing the world in which the characters live. Not too much detail or too little. Also, I love the character development.

NARRATOR: Really enjoyed the narrators reading of this book. Added to the overall story.

OVERALL: I was drawn in, really wanting to know what happened to the characters, and listened to the entire book in two days. I am now looking forward to listening to the second two books in the series.

Cool perspective after a nuclear holocaust

This gave an interesting look at what could happen after a nuclear holocaust. The characters were well developed and made this a very interesting read.

Great story. Loved the characters. The world building was vivid and amazing. The story itself was well written and totally holds your complete attention. Loved it. I look forward to the next one.

NARRATOR REVIEW.
The narrator was very good. She really helped bring the story to life.

Disappointed; In both the story and the narrator!

In the beginning I thought this book had great potential, but then there was all those different time jumps and different point of views and everything got confusing real quick. Like I said, this book had great potential, but it fell flat for me. I didn't care one bit for the characters and the so called "boggymonsters" those evil creatures, I thought those were just 'meh'.
Sorry, but this book ain't gonna get more than 1 star from me.
And then the narrator, what was she doing? I thought she was sleeping whenever she read the female characters lines/dialogue. Horrible; just plain and simply horrible.

A dystopian that faces serious issues from our time while empowering young women. Solomon being the link from our near future to their present was clever, and Enaid was a wonderful image of wife queen and mother. Areenna and Mikaal come into their strengths and that before the island which seems as much like an introspection into finding one's true self, a woman must first accept and learn the gifts given by the women in her life.

Would you recommend this audiobook to a friend? If so, why?
I wish there was a more of a back story or maybe a prologue of how Solomon Roth adapted to the new world.
The ending was perfect to lead up to the next book which I'll be picking up next paycheck.

What did you like best about this story?
I thought the idea of a mutated medieval world after the fallout died down was interesting, I'm actually glad Mr. Wind described the mutated animals in such great detail it really helped with the reading of the book.


What does Helene McCardle bring to the story that you wouldn’t experience if you just read the book?
I was to first say Helene McCardle is brilliant as a reader. I don't want to give away a bunch of the book but there are a few twists that left me hanging waiting to go to work again and listen during my commute.

This is a post-apocalyptic and a fantasy story

This is a post-apocalyptic and a fantasy story all in one. The year is 5271 and the world as we know it has been destroyed by nuclear war and while the human race has survived it is more like medieval times, with castles, keeps, Kings, Queens and High Kings. Men are stronger and women can do magic. The radiation has caused many changes in plants and animals of the world. I’m having a hard time coming up with anything more descriptive without giving spoilers, while a bit frustrating, learning as the characters do makes the story more compelling (at least to me it does).

I enjoyed this story, even though at times it seemed to drag a bit, it kept my interest. The world building was good and you did not have a big info dump at the beginning, information is doled out as the story progresses. While not the same, the theme of this story reminded me a lot of The Golden Compass/His Dark Materials series….different worlds, ages but the theme of Good versus Evil and an young man and woman journeying together to fight it….an oversimplification of the plot but you get the idea. The scary part to me is how this reflects so much of what is going on in the world today. The dark circle wants to conquer and enslave all if Neveah and the Dark Circle of 5271 are from the same terrorist group that launched the nuclear war…they use dark sorceresses to cause strife, disharmony…if they can get the kingdoms of Neveah to go to war with each other, the negative energy from this will make them more powerful.

Helene McCardle does an excellent job narrating, while some of the male characters were not quite as easy to distinguish, all the female characters were very distinct. I do think that this story is one hat would do well as either a graphic novel or just in general a full cast narration.

As usual, the most frustrating part is that the adventure is not yet over but the audio for the next book is not yet available….while I could pick up the e-book, this story really works well as an audio so I will wait to continue until it is out.

I really enjoyed this book and can't wait to get the next book to find out what happens. I loved the way everything had a slightly different twist on what they were meant to be crawlers (I think that is right) instead of horses etc a great imagination and its a brilliant story teller that helps you imagine what is described. This book has both.
This is the journey of Areenna and Mikaal as they learn how to trust and use the magic powers they have been blessed with. For Areenna this is easy as her mother was a powerful magician and has started training her at an early age but she struggles with combat, mainly the use of her sword. Mikaal under his fathers training is a masterful swords man but as no man has ever been able to use magic he is struggling to harness his powers. Together they must make an unstoppable team, as the prophecy is they are the only ones with enough skill to stop the Dark ones once and for all and save Neveah.
Liked the narrator as she had a very calm and soothing voice.

This was my first exposure to David Wind's writing and I was delighted. His characters were complex and well developed, the storyline intriguing and filled with action and clever solutions to the obstacles encountered along their journey. I'm looking forward to the next novel in the series.

I loved it. Great story great characters extremely well written plenty of action plenty of magic plenty of mystery and suspense. You become truly engaged in the story and intertwined with the characters as you read through it. You also become emotionally engaged and feel what they feel and think. I cannot wait until the next book.
Recommend for almost anyone at least 10 years old or above anyway including teens adults seniors whoever.

Where does Born to Magic rank among all the audiobooks you’ve listened to so far?

I can say quite simply that I’m already looking forward to the next book in series as I want to see what else this brilliant author has in store for me!

What was one of the most memorable moments of Born to Magic?

This amazing future world is absolutely irresistible and I was mesmerized by it.

Brilliant!! The narration is obviously essential for an audiobook and the narration fitted the book perfectly.

Absolutely. I think it took me three sittings to get through it but I would have loved to have gone from the start to finish in one. It was great.

Where does Born to Magic rank among all the audiobooks you’ve listened to so far?

Born to magic is a good soiled book I would put it in the top half of audiobooks that I've listened to.

What was one of the most memorable moments of Born to Magic?

I particularly enjoyed the parts in the past were explained.

Which character – as performed by Helene McCardle – was your favourite?

I enjoyed the evil witch.

A good mix of si-fi and fantasy. Looking forward to part 2. I wish that there had been more time spent with Solomon Roth on his ship.
I was provided this audiobook at no charge by the author, publisher and/or narrator in exchange for an unbiased review via AudiobookBlast dot com.