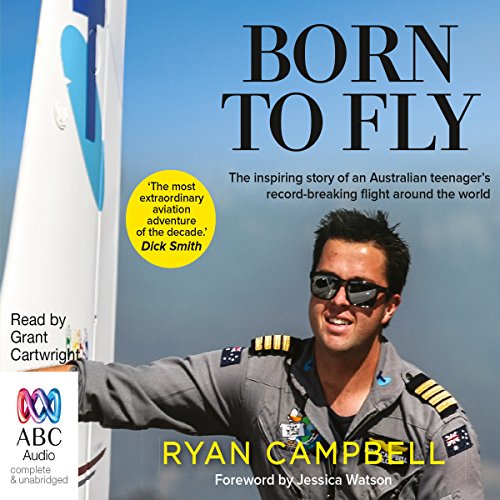 By: Ryan Campbell
Narrated by: Grant Cartwright
Try for $0.00

When Ryan Campbell was six he fell in love with aeroplanes. It was a passion that was to dominate his childhood and it was no surprise when at 15, Ryan became the youngest pilot in Australia. Inspired by his father and grandfather who were also aviators, Ryan sought a challenge and, like adventurers before him, he found one that spoke to him more than the rest. He wanted to fly around the world, solo, in a single-engine aircraft.

In Born to Fly, Ryan recounts his remarkable journey from a boy with a dream to becoming, at age 19, the youngest person ever to circumnavigate the world solo in a single-engine aircraft, and shares with us the joy of flight. Showing maturity, determination and courage beyond his years, Ryan fundraised $250,000 from scratch and drew on the advice of renowned aviators such as Jim Hazelton ('a man who has more hours adjusting his seat in a plane than I do total flying time') and Dick Smith before setting out on his thrilling 70-day odyssey. In Born to Fly, Ryan captures all the dry-mouthed excitement of flying alone above the earth with only one engine and recounts his adventures from staying calm with iced-over wings, landing in a country where you are not welcome and dealing with international media when still a teenager. Ryan landed 31 times in 15 countries and covered more than 24,000 nautical miles, while trying to avoid that 'alternative aerodrome', the ocean. Born to Fly is a fascinating view of the world from above, shown to us by a dryly funny and highly charismatic man who has already done more in his short life than most of us do in a lifetime.

"The most extraordinary aviation adventure of the decade. A great story in the spirit of Charles Kingsford-Smith and Bert Hinkler." ( Dick Smith)

What listeners say about Born to Fly

Such an inspiring story and story of adventure! Love the easy read! cannot express how this book truly touched me!

Generally accomplished while young, wouldn't catch me doing it in anything less than a twin turbo prop. Well done, great listen/read!

Well written book about this young man's flight around the world. As a fellow pilot, I was very impressed with Ryan's story. He did a superb job explaining certain procedures in lemans terms, such as an ILS instrument approach. Ryan has a bright future in life.

I just finished your book to the very end.... I thoroughly enjoyed every minute, and now I’m sad it over.
Now in my 50’s (can’t believe it) I only learnt to fly 10 odd years ago and it’s now my absolute ’happy place’ in life - being up in the sky.
Thank you Ryan for the amazing inspirational story, and congratulations. You’ve made Australia proud.
You’ve also inspired me to go for my private IFR - I hate theory!! Lol - and do more flying.

great and all inspirational to young aviators and the wider youth.
well done to Ryan Campbell a book very much enjoyed and many times in the future.

Inspiring real life story. Know its good when the kids ask you to turn in back on when your on a long car trip.