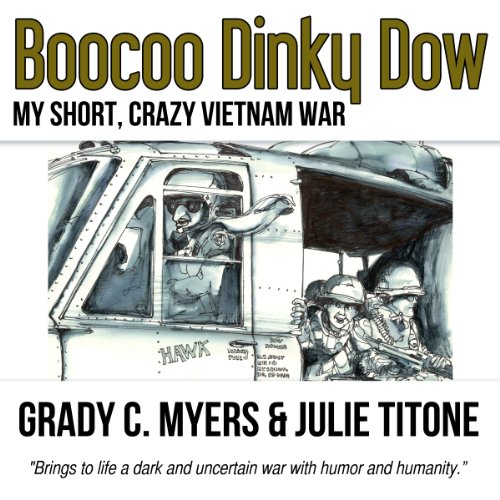 Grady Myers was an artistic but aimless teenager in 1968, when, desperate for troops, the U.S. Army overlooked his extreme nearsightedness and transformed him into Hoss, an M-60 machine gunner. His memoir Boocoo Dinky Dow: My Short, Crazy Vietnam War is by turns funny and sobering. Grady recounts his military initiation at Fort Lewis, where there could be a fuzzy line between training and torture. He describes the intensity of Vietnam, where an old man carrying a bundle of sticks posed a moral dilemma and a young man would weigh the burden of his virginity against the dubious pleasures of riverbank prostitutes. Grady's explosives-happy comrades in Charlie Company sometimes posed the greatest danger. But, in a dramatic ambush, that same bunch of crazy soldiers risked their lives to save his. To learn more, visit www.shortcrazyvietnam.com

Hold lot of nothing

I didn't care for it. I've read a lot of Vietnam stories.sorry you got shot.just boring book.

Shit Happens, nothing more needs to be said for those in the know but I needed to give the review people more words.

What made the experience of listening to Boocoo Dinky Dow the most enjoyable?

It's a fairly decent representation of the grunts life in Vietnam, but there seems to be parts missing. I'm certain that this is because it's essentially a collection of war stories put together after the authors death. The clear clue I can point to is him referring to a specific helicopter pilot a couple of times as if the reader should know who it is, yet the pilot is never introduced at all.

Would you be willing to try another book from Grady C. Myers and Julie Titone ? Why or why not?

Well, Grady is dead, and Julie is clearly just a friend who gathered up him amnuscripts and got them published, so I doubt we'll hear from either again,

What does Jeffrey S. Fellin bring to the story that you wouldn’t experience if you just read the book?

Unfortunately in war stories, sometimes the humor just doesn't translate and 'you had to be there'. That is the case with this book. Though I'm certain that when Grady was telling them, the stories were side splitters, that is unfortunately not the case with the audiobook.

Unfortunately this was not really a book to my liking, however, I believe it is a good autobiographical Vietnam War story. I’m just not one for the graphic nature of war stories or for that matter any genre that has such sadness and/or bloody gore, and since my son is a soldier with two tours in Iraq….well, I’m just not keen on hearing it. There is a very nice prologue from the co-author (Grady’s ex-wife). Right off the bat you are in Vietnam but soon you return stateside to hear Grady Meyers’ original interest for joining the military and that scene was hilarious. From there you follow his military life. Throughout the book there are funny stories, but there are many more sad ones, after all it is a war story and war is awful. I have to give both authors credit though, the overall tone was not really morbid, just facts entwined within an adventure story. I never really did figure out what the title meant but I think it was something a Vietnamese woman said in response to some off-color conversation the soldiers were having with her.

As far as the narrator, Jeffrey S Felon, his voice was strong and he kept the story moving at a steady pace, plus, he had great sound effects. I was impressed with his conversational style especially when multiple characters were talking, sometimes all at once. I’m not sure I would like his reading of another genre but he was well-suited for this one (and I would be happy to hear him again to test my thought). The production was very well done. The front cover picture is great and I imagine the written book with the pictures by the author would be nice to see.

It is obvious the author was deeply moved by his experience in Vietnam, and obviously had a rough life after he was injured, but at least in the story he doesn’t victimize himself. Throughout the book the reader can see how easy it would be to give up and spend the rest of your life embittered but I didn’t hear that from his words; he seems much more interested in creating if not a happier view, a less traumatic one by infusing the period with humor. After a time though, it all got to be a bit monotonous and I kept thinking it a long story, but really it’s only about 7 hours, 30 minutes.

A great story, well read, and a lot of fun, it's been a long time since I've enjoy the book so much

Great story, Connected with the author with both funny, serious and interesting moments well worth a listen. RIP Grady.