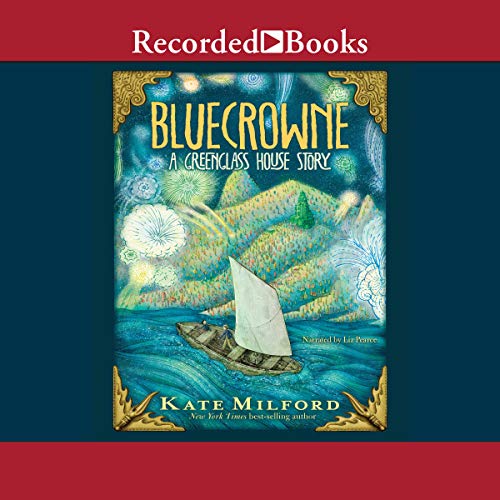 By: Kate Milford
Narrated by: Liz Pearce
Try for $0.00

Return to the world of the best-selling Greenglass House, where smugglers, magic, and pyrotechnics mix, in a new adventure from a New York Times best-selling, National Book Award-nominated, and Edgar Award-winning author.

Lucy Bluecrowne is beginning a new life ashore with her stepmother and half brother, though she's certain the only place she'll ever belong is with her father on a ship of war as part of the crew. She doesn't care that living in a house is safer and the proper place for a 12-year-old girl; it's boring. But then two nefarious strangers identify her little brother as the pyrotechnical prodigy they need to enact an evil plan, and it will take all Lucy's fighting instincts to keep her family together.

Set in the magical Greenglass House world, this action-packed tale of the house's first inhabitants reveals the origins of some of its many secrets.

What listeners say about Bluecrowne

Fantastic writer. The world she is creating makes me think of LOTR, albeit more accessible.

A terrific addition to the Greenglass House series. It adds a lot to the story behind the house, and the people. Plus it’s a wonderful tale all on its own!

We like the author but this one has a really weird storyline. There was also a fair amount of swearing. Additionally, it is unrelated to the previous book and it is a little bit scary as well (for a mature 11 year old).