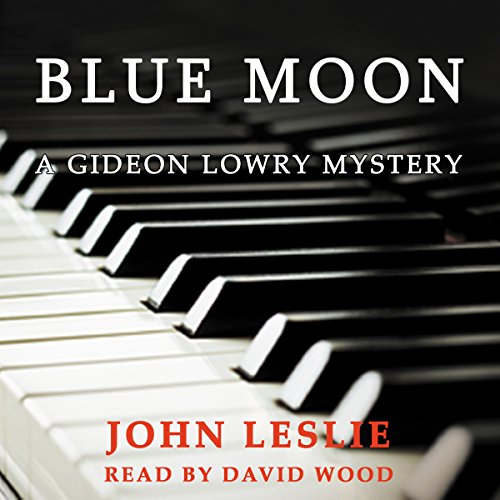 PI Gideon “Bud” Lowry has been known to play Cole Porter tunes during his late-night piano gigs, but lately he’s had reason to finger some melancholy melodies. Besides a suspicious fire near his Duval Street home, Gideon’s old flame, successful restaurateur Gabriella Wade, is getting married. Years ago, Gideon and Gaby were a hot item, before her true love - her Blue Moon restaurant - monopolized her time. But now her wheeler-dealer fiancé, Roy Emerson, is refusing to take a simple medical test and she wants Gideon to find out why.

Fired up by his misfortunes and a strong desire to protect Gaby, Gideon begins an investigation into Roy’s background that stretches from Key West to the Wild West - Wyoming. And the results are explosive. But before Gideon can open Gaby’s love-blind eyes, she and Roy elope, and disappear. With throngs of tourists descending upon Key West for the annual Halloween parade, Gideon is one native conch who isn’t masking his fears - because if he doesn’t find Gaby soon, he’ll be left standing alone at the Blue Moon forever.

What listeners say about Blue Moon

Blue Moon is Book 4 in the Gideon Lowry Key West Mysteries Series and can be enjoyed as a standalone. Gideon is asked to investigate an ex-lover's fiance and is disturbed by what he turns up. On another front, he has seen the writing on the wall for years as "progress" heralds in a new era for the residents of Key West and Duvall Street. Will he continue the fight against the developers aimed at razing his street or remain steadfast in his opposition?

I have listened to all of the audiobooks in this great series and am a little sad that this is the last. It's almost like saying goodbye to an old friend. As with the other books, this was a great mystery but had a definite melancholic feel to it. I've enjoyed the series tremendously and have also liked getting to know Gideon, warts and all. David A. Wood's narration was exceptional and was one of the highlights for me. Blue Moon was a terrific listening experience and I would recommend it.

Not my usual genre, I'm more into long (13 plus hours per book ) science-fiction and hard core in that but amazingly I've totally enjoyed Blue Moon ( wasn't expecting that ), it was fun easy to follow because of the great writing and even better performance that really surprised me.
Without giving away anything I'll only say that this is one that's worth listening to, that I fully do recommend it !!!

Blue Moon: Gideon Lowry Key West Mysteries, book 4 by John Leslie was just great. Pretty bummed that this is the final book in the series, because I really enjoy these and know that when I start one, I'm going to enjoy the story. Gideon and his friends are likable characters and the books are always well thought out and well written. This isn't a fast paced, action thriller/mystery, but a well paced, stroll through the Keys, filled with mystery and some shady characters to boot. Gideon is a good friend and these books always seem to revolve around his helping friends that have gotten caught up somehow in shady business or shady people. I don't want to give the story away, but I definitely recommend checking this book out if the summary sounds good to you. Yes, the story is a bit predictable, but great, nonetheless.

David Wood did a great job narration and is a perfect fit to voice Gideon. He also does a wonderful job with the secondary characters as well. His accents and cadence make you feel like you're right there in the story. I'll happily listen to an audiobook narrated by him any day. I was voluntarily provided this free review copy audiobook by the author, narrator, or publisher for an honest review.

This was a good story that was very well done by the narrator. A little easy to guess the outcome but an enjoyable read.

This is the second book I have read in this series. I loved the story and the setting of key west. Missed the judge from the first book but gabby made out well in the end. I enjoyed this book very much and can’t wait to read more by this author. The narrator did a beautiful job.
I received this free for an honest review from the author or narrator.

Sad this is the last

I got into this series late and read the 3rd and 4th book. They were originally written in the 1990s, but hold up really well. I'm not sure how I overlooked them as they are a Florida mystery series and while not the same, make me think of John D. MacDonald and Travis McGee.
David A. Wood continues with a well-paced, weary narration which is just the right touch.
I definitely recommend this series and just wish that the author added more books.

Blue Moon is the 4th Gideon Lowry book that I have listened to and am enjoying the fact that Gideon is an aging and almost nostalgic "private eye". Years ago Gideon was involved briefly with Gabriella Wade, who is now the owner of a successful restaurant. She asks Gideon to investigate her fiancé, Roy Emerson as she has a few uneasy feelings about his truthfulness.
As Gideon delves into Roy's background, he also is once again dealing with realtors that wish to buy his place and that of his neighbors in order to build a mall. Once again I enjoyed this 4th book in the series and recommend.
I was given this free review copy audiobook at my request and have voluntarily left this review.

This is a standalone listen and part of a series. The author does a fantastic job with the imagery in this book and subtle humor. I loved the twists and turns this book had. I thought the narrator was fantastic with his distinguishable voices for the various characters. I requested this review copy audiobook and have voluntarily written this review.

This is a well written detective novel situated in Key West. The forth in a series,I enjoyed it even though I read none of the prior novels. Well described characters. David Wood does a good job as narrator, especially for the central character, Gideon.

A fitting end to a great series!

I love Gideon/Bud Lowry. He's the every man we all deserve. He's been there, done that, fell down, got back up, learned, loved and lost. He's on the downside of the life curb but that has yet to stop him.

This last book in the series is a soft mystery. Unlike, the first three books, you know who the bad guy is pretty early on. Bud's efforts to save - his friend, his neighbor, himself - is the meat and potatoes of this listen.

The narrator has made getting to know Bud very special. Wood's subtle delivery of Bud and Bud's inner struggles drew me in with the first book and that remains so in this final installment.

If this is your first book in the series, do yourself a favor and start from the beginning. Each listens are stand alones but you won't be able to appreciate this book as much if you don't know the full Gideon/Bud Lowry.

Gideon Lowry, private detective with little to do, and part time bar pianist playing mostly Gershwin and Cole Porter, has lived his whole life in Key West. He used to know pretty well everyone there. But over the years it has been changing, becoming more of a tourist destination and the developers are intent on transforming it even more. His home and office just happen to be right in the middle of the proposed rebuilding to a fancy mall and he, together with his neighbouring run down grocery store are among the last to hold out against purchase. The changes have brought prosperity to some: his long time friend Gabby has transformed her little cafe into a trendy, expensive restaurant, too pricey now for him to eat at.
Then his neighbour's shop is burned down. And Gabby is about to get married...

This is the fourth in the wonderful Gideon Lowry series, each one a complete stand alone book. The pace, like that of old Key West itself, might be gentle but the story itself is packed full - of character, atmosphere and underlying tensions. Superbly written, each book is a timeless gem, a peek through the eyes of a long time inhabitant at the unwelcome changes destroying the life he has known. And then there is the mystery, too. Excellence personified.

As with the previous three stories, Blue Moon is narrated by David Wood, a perfect pairing with the text. He becomes Gideon, the reading executed at just the right pace, intonation and expression following each nuance - and the other characters are also voiced individually. Book and narrator in harmony.
Listening to these stories, and Blue Moon in particular, is sheer pleasure. I requested, and was given with no strings attached, a complimentary copy by the rights holder, via Audiobook Boom. Thank you so much. I have loved each book in this series and cannot recommend them highly enough to anyone enjoying good writing, real person characterisation, a sense of time and place and a good detective story without reliance on too much physical violence or confrontation - all read by a fine narrator.