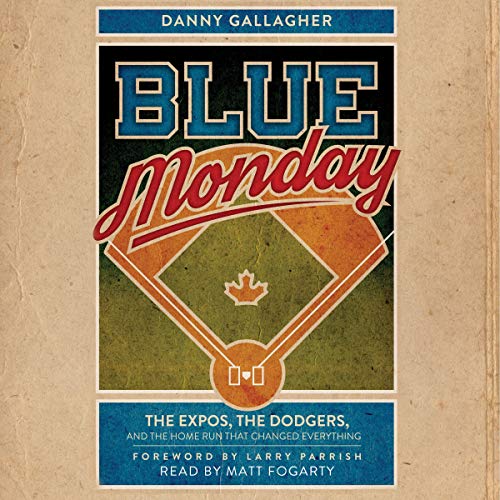 Blue Monday: one of the most unforgettable days in Canadian baseball history.

Danny Gallagher leads listeners up to that infamous day in October 1981 when Rick Monday of the Los Angeles Dodgers hit a home run off of Montreal Expos pitcher Steve Rogers in the ninth inning, giving the Dodgers a berth in the World Series. Listeners will be taken back to 1976 when a five-year plan for winning the National League championship was set in place by the Expos with the hiring of experienced manager Dick Williams.

Gallagher examines old narratives about Blue Monday and talks to all the key players involved in the game, unearthing secrets and stories never before told.

“Those who were Expos fans or followed the team during its existence will want to pick this up to learn a little more about the man who broke Canada’s heart, Rick Monday. Gallagher’s interviews and writing about Monday since that home run give the reader an inside glimpse into the man that many baseball fans have never seen.” (The Guy Who Reviews Sports Books)

What listeners say about Blue Monday

A Fun Book for Fans

I enjoyed the book. It was well researched, based on many interviews with key players and others involved. Enjoyable for any fan that appreciates baseball in the 1970's and 1980's.
The narrator was good, enthusiastic and appropriate for this book. I appreciated the description of photos and the reading of captions. A minor complaint were the mispronunciation of some of the many names in the book.

A great story that took me down memory lane for sure. I grew up watching the CBC on cable in the US. Expos games were broadcast often and I quickly became a fan. The “Blue Monday” game was tough for the franchise but they survived —at least for a while. The story was balanced and should appeal to Dodger and Expos fans alike. highly recommend this book if you like baseball stories and history and especially if you want to relive the 81 post season.