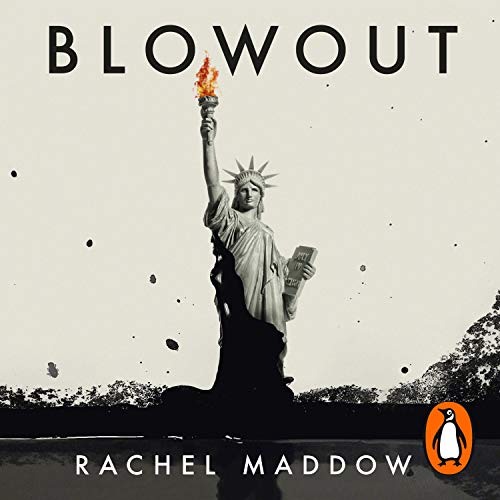 Award-winning American news presenter Rachel Maddow investigates remarkable stories from around the globe, all leading back to the same crooked source: the unimaginably lucrative and equally corrupting oil and gas industry.

From Oklahoma, Texas, and Washington to Kyiv, Siberia, and Moscow to Equatorial Guinea and Alaska, from a mansion in Malibu with the world’s largest collection of Michael Jackson memorabilia to luxury hotels in central London, from deep within the earth’s crust to the icy surface of the Arctic seas, Blowout uncovers a web of international corruption.

With her trademark black humour, Maddow takes us through the purposeful detonation of a 50-kiloton nuclear bomb underground near Colorado, man-made earthquakes, murdered cows and the international financial crisis, to the greed and incompetence of Big Oil and Gas and a surprising conclusion about why the Russian government hacked the 2016 US election. Chevron, BP and a host of other industry players get their star turn, most notably ExxonMobil and the deceptively well-behaved Rex Tillerson.

The oil and gas industry has weakened democracies in developed and developing countries, fouled oceans and rivers and propped up authoritarian thieves and killers. But being outraged at it is, according to Maddow, 'like being indignant when a lion takes down and eats a gazelle. You can't really blame the lion. It's in her nature'.

Blowout is a call to contain the lion: to stop subsidising the wealthiest businesses on earth, to fight for transparency and to check the influence of the world's most destructive industry and its enablers. The stakes have never been higher. As Maddow writes, 'Democracy either wins this one or disappears'.

What listeners say about Blowout

I love this book and have listened to it several times to get a more complete understanding. I have the Audible copy which is read by Rachel Maddow herself, making this a total not to listen to.

I feel like I've not only learned more that I ever could have about Oil (which was surprisingly very interesting)...but that I've been on a journey around the world whilst doing so. Very informative. Explained in Rachel's usual detailed way and easy to understand. I never knew the true extent to the oil businesses and how it affects democracies around the globe. Oil equals rich people who often take take take but I feel now fully informed about the lives of the rich and powerful, the poor and needy, the level of corruption and the lack of accountability and basic lack of moral compass in those working in this field. Love learning new things and this has not disappointed. Putin has pissed himself by Pussy Riot a surprise as well as the spies living together, the BP oil spill ,Chesapeake, the IRA, the Sochi labour workers, Rex Tillerson to Michael Jackson's crystal glove. There is so much more in this book and one for Rachel Maddow to be very proud of indeed.

Wow! What a great ,compact expose of misfeeds!

Rachel's narration contributes greatly to a real page-turner partial expose of an industry that could do with allot more scrutiny .

Best book in a long time

How will this end, I hope the new green deal will have support in the future so the world can leave the oil and gas extraction that is such a threat on so many levels.

A must read for all users of petrol and gas that's everyone. You cannot say anymore that you don't understand what's behind our energy business. On humanity, health, moral and survival grounds we need to consider a greener energy solution. I highly recommend this informative and fancinating read. Thanks.

I love Rachel Maddow’s show and I enjoyed this audiobook, read by herself, as much as listening to any podcast of her monologues like ‘bag men’. If you don’t agree with Rachel’s political views, you may find too much opinion in the book. If you do agree, you will be truly amused by it, to quote the metaphor of oil companies that ‘eat governance for breakfast to poop out royalties by lunch time’ as a great example of enjoyable Rachel Maddow speak. Her account of Russian politics is in my view is based a bit too much on the leads she followed from the election interference debacle.

Amazing book! Well worth a read/listen. In true Rachel Maddow style, full of facts and wit at the same time.

incredibly informative and yet riveting.

I didn't know I'd find the recent history of the oil and gas industry so fascinating. The geo political impact of non-renewable energy supply is mind blowing.

Excellent story, there is so much more to tell. Is awfully grim.

It’s a battle I worry about.

Brilliant book. albeit disturbing content. What a bonus - the book is read by the author Rachel Maddow. One of the best books I’ve read and definitely the best narration of heard on audible. This book is like doing a degree in modern history, but reads like a novel. Nice work Rachel Maddow. Deserves its status as a best seller.

My 1st audiobook ever. Was skeptical at the start,loved it.
Always been a fan of hard copy books, however have to admit this was really good.

Enjoyed it all the way through!

Captured every sense of the oil industry’s ludicrousness.

The treat was that Rachel narrated it. It was as if she was talking to me directly, in a low key coffee shop about her research. Thoroughly enjoyed it.