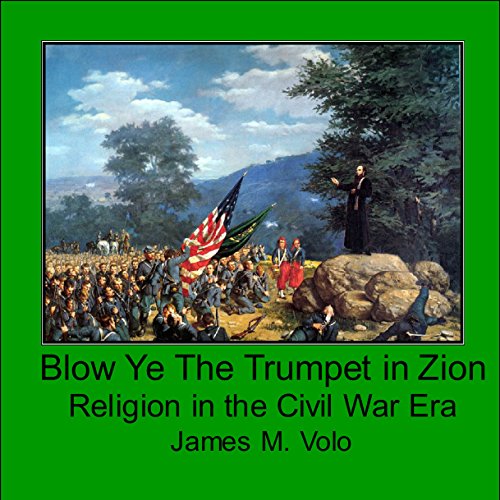 Blow Ye the Trumpet in Zion

Sincere religious reflection was a hallmark of soldiers in both armies in the Civil War, and it was generally an authentic religiosity rather than a battlefield conversion to spirituality. This is not surprising, as these characteristics had been common in the general population since the founding of the United States. Americans, despite their politics and prejudices, had always been and continued to be a strongly religious and highly moral people throughout the Antebellum Period (c. 1820-1860). Although there may have been a large number of battlefield conversions, in the average community, a person's attitude toward devotion was strongly shaped by the dominant religious beliefs of his neighbors or the local population as a whole.

This book has been written for those persons interested in not only the Civil War but also in the religious culture of the Antebellum Era that affected it. For a variety of reasons, historians seem to have studied the morale of Southerners more closely than that of their Northern foe in the Civil War Era. Because Confederate troops had more success in keeping Federal (Union) troops at bay, morale stayed reasonably high into mid-1864. The role of religion has not been so thoroughly debated among historians. It has rather been ignored. Of the thousands of titles dealing with the Civil War, surprisingly few address the significant role that religion played in framing the issues of the conflict or in driving the sacrifices of those who fought and died in it. It is the purpose of this selection to investigate and document this facet of the 19th century.

There is a great need today for Americans to further their understanding of the role religion has played in the rebirth of the government of a reunited United States. It is a national embarrassment that adults, in particular, are virtually uneducated in the foundations of American history. An attempt has been made herein to compartmentalize this history so that the interconnection that affected religious thought in America can be better understood.

What listeners say about Blow Ye the Trumpet in Zion