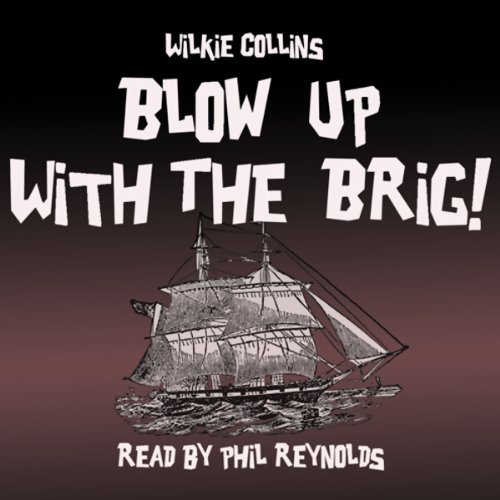 Blow Up with the Brig

By: Wilkie Collins
Narrated by: Phil Reynolds
Try for $0.00

Wilkie Collins was an early master of the mystery and detective story and the first English novelist to write in this genre. "Blow Up with the Brig" is a short story written in 1859, just a year before he wrote his famous novel The Woman in White.
© and (P) Fantom Films

What listeners say about Blow Up with the Brig

Phil Reynolds is a solid narrator who is just right for this little story with its catchy title, which I didn't understand at first. I knew it was going to be quirky because Collins is quirky. One never knows what comes next. It doesn't take long to figure out the narrator survives. How else is he able to tell us what happened? Even then, Collins manages to create suspense without music or moving pictures. Was it Yogi Bera who said he liked the book better because the pictures were better? Wilkie Collins is one of my pet exceptions to my general reading/listening habits. I don't know how he wormed his way into my required list but there he is right next to Trollope, Austen, the Brontes, Scott, von Arnim and a long list of notables. Maybe it was the title of the book he wrote immediately after this story which did the trick: "The Lady in White". There is romance in that title. Romance.

I'm very often amused at some comments made about my long dead authors, my authors. I have seen words like hackneyed, overused device, worn-out, boring and so forth applied to Trollope, Austen, Collins and others. These folks authored the trite phrases, themes and situations which have been copied and adapted thousands of times since. Austen's Sense and Sensibility was akin to Captain James T. Kirk boldly going where no woman or man had gone before. It was the first of its kind ever. Dittos for Wilkie Collins style of storytelling. No one, anywhere, ever, had done anything quite this way before. Austen, Trollope, Collins and many others struck out across a pathless wilderness leaving a trail for others to carry in packs of trites, hackneyes, and worn-outs. If I am to be bored, then let me be bored by the original rather than the tenth generation re-write of a copy.