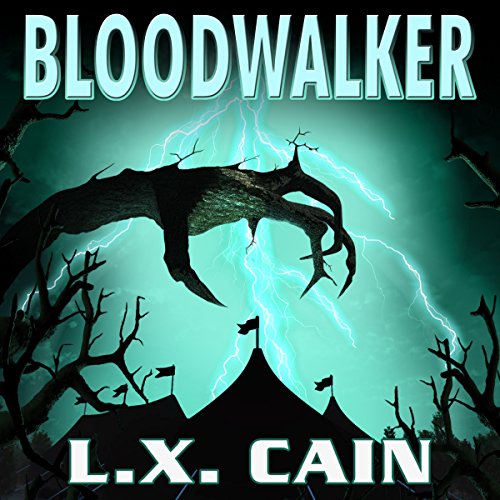 When Zorka Circus performs, its big top roars with laughter and cheers, but when it moves on, children vanish from the European towns it leaves behind.

Circus security chief Rurik suspects a killer hides among the international performers, but they close ranks - they've always viewed lightning-scarred Rurik as the monster. Nevertheless, he's determined to find the culprit and stop them before anyone else dies and the only place he can call home is ripped apart by the murders.

Into Zorka Circus comes the Skomori clan, despised as gravediggers and ghoulish bloodwalkers. A one-day truce allows bloodwalker Sylvie to marry. Instead, she finds a body. Alerting others will defy her clan's strict rules, break the truce, and leave her an outcast.

When more bodies turn up, the killer's trail becomes impossible to ignore. Rurik and Sylvie must follow the clues - even if they lead to something unimaginable.

What listeners say about Bloodwalker

Everything about this book was right up my ally, only problem was, I never really got engaged. I had a really hard time connecting with any of the characters and about half way through really just didn't care what was happening. I think part of the issue is that it felt like a really slow start that just couldn't hook me. I made it all the way to the end hoping for something that would change my mind , although that never happened. The world that L.X. Cain created was perfect and really should have resonated with me. I hope that I am in the minority here because this story seemed like it should have been a 5 star review from me. Jonatan Waters did a great job with the narration. I loved his accents and character voices, yet it just wasn't enough to get me excited about the story. I was voluntarily provided this free review copy audiobook by the author, narrator, or publisher.

Scarey tale of twisted gypsy tribe that cares for all dead,yet are shunned by others.When a wedding comes along,there are numerous brides, and the brides show up dead,no one can imagine who is doing the killings.Beware who you trust!Jonathan Waters was a fine narrator.I was given this free review copy audiobook at my request and have voluntarily left this review.'

To be in the wrong path!

I really enjoyed this story! The trials of being another race, what do you do when you are miss treated! Narrator did an amazing job!

Wow!! This book is so good!!! I keep trying books outside of my usual genre and loving it! This book is well worth reading!!! Also the narrator did a great job.

I just admit that I was hooked from page one and could not stop listening. I loved all the different mysterious characters and the plot. Bloodwalker is creative, scary, intriguing and heartwarming all at the same time. If you love horror I recommend this book. I received this book at my request. I am leaving my honest opinion here of my own volition.