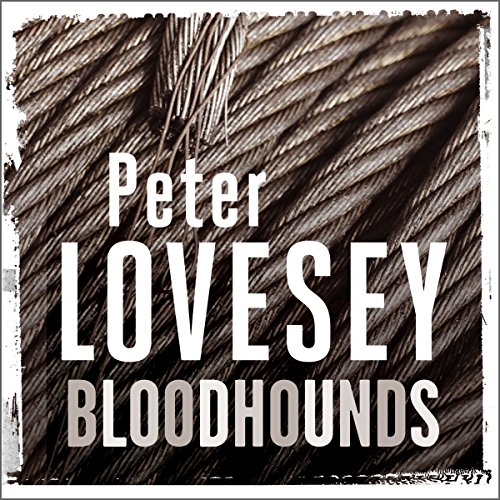 By: Peter Lovesey
Narrated by: Peter Wickham
Try for $0.00

Winner of the Crime Writers Association Silver Dagger, the Barry Award and the Macavity Award.

'Darling, if ever I've met a group of potential murderers anywhere, it's the Bloodhounds.' Thus says one of the members of the Bloodhounds of Bath, a society that meets in a crypt to discuss crime novels. But to their latest recruit, they seem just a gaggle of dotty misfits, until one of them reveals that he is in possession of an immensely valuable stamp, recently stolen from the Postal Museum.

Then theft is overtaken by murder when the corpse of one of the Bloodhounds is found in a locked houseboat, with the only key in the possession of a man with a perfect alibi. Burly Peter Diamond finds himself embroiled in a mystery evoking the classic crime puzzles of John Dickson Carr.

What listeners say about Bloodhounds

So disappointed with this book.. I think I shall have to return it as I can't even finish it. I love Peter Diamond books & have most of them. Michael Tudor- Barnes is the master of narration in these books & I am sorry the new narrator didn't meet with my expectations... Just droned on & on & it was hard to distinguish which character was who after a while....I have tried hard to listen to this, but to no avail.
This I don't recommend.

The story itself is great - Lovesey is a master at the genre - but the change of narrator has seriously diminished the overall enjoyment. I have listened to every available Peter Lovesey/Diamond book but if this one had been my first encounter it would have been my last. Peter Wickham's narration is reminiscent of a spoof reading of a novel and the falsetto voice he assumes for the female characters is grating and tiresome. The original narrator for the series, Michael Tudor Barnes, gave a superb interpretation of the characters of Diamond and the other players within each story. Sadly Peter Wickham has not been able to continue the legacy, and it seems that he has been used as the narrator for more of the Diamond novels soon to be released. I wonder if Peter Lovesey has heard the new Audible renditions of his books ...

What made the experience of listening to Bloodhounds the most enjoyable?

This is a great read - clever, intricate and gripping. A must for crime fiction fans in all sorts of ways.

Have you listened to any of Peter Wickham’s other performances? How does this one compare?

Good story as usual though the twist at the end is a little too unbelievable. Worth listening to anyway!

A bit slow to start with but it gets more enjoyable.
Not so keen on this narrator, he makes Peter Diamond sound rather 'tame' and Wigfall stupid. Pease resist the impulse to make West Country people sound dim! Oh and Avon, as in the river and Avon & Somerset Police is not pronounced like the 'Avon' lady but rather AVUN.