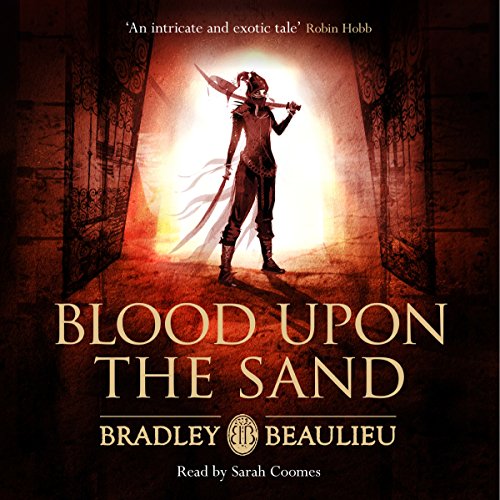 Blood upon the Sand

By: Bradley Beaulieu
Narrated by: Sarah Coomes
Try for $0.00

Çeda's mission is partly complete...so now she must continue to uncover the riddles her mother has left - especially when those scattered clues are incomplete. The answers lie in the desert, where the few remaining members of the Thirteenth Tribe are hidden, and though they doubt she can make a stand against the Kings, they are prepared to help her in her quest. The remaining Kings, however, have not been idle. One of their own has been murdered, and the hunt is on to find the culprit. Ceda unlocks the last secrets as their hunt comes closer and closer...and Çeda may be forced to use the King's tainted power herself, if she is to save her own life - and the city of Sharakhai.

What listeners say about Blood upon the Sand

Finally the sequel came through (I did not appreciate how long it took)!!
I did however thoroughly enjoy this book. The twists and turns, the hopes and fears, the victories and failures, the different conspiracies and competitors for power - all make for a spellbinding tale!!
However, I've never been so irritated with a narrator as I was when listening to this book! The inconsistency in pronunciation of names and voices for the particular and numerous key game players often caused me to get muddled up!! If I'd had the book, I'd have easily turned back a few pages here and there to verify the characters..but using an audible book makes this difficult and cumbersome. The male kings were often given young female voices, at times rough older male voices...consistency and appropriateness of voice is so essential to enable the reader to visualise and be drawn into the world created by author, enables reader to fully appreciate the characters and experience the emotions intended by the author. The narrator did not deliver in this respect!!
That said, I look forward to the final instalment of this trilogy and hope that it'll be published much sooner than later and with a better narrator!. Being so complex and long, readers often forget much, get a disconnect or even lose interest eventually if a sequel takes too long!!

Really taken me by surprise being so gripped

As per the first book really. Didn't think I was that gripped by it, until I realised how many hours had passed. Shame in this one the narrator seems to get a cold, probably shouldn't have recorded at that time as the voice chance distracted me from the story, but the story won over.