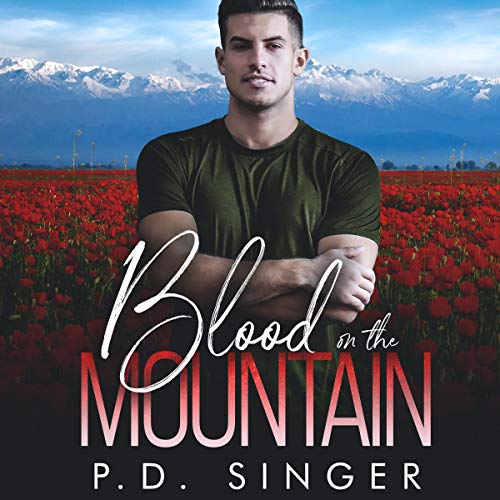 Blood on the Mountain

Jake Landon thinks a second ranger season in the Colorado Rockies with his hyper-competent lover Kurt Carlson is close enough to heaven, and a national forest is big enough to be his closet. City life, school - and the luxuries of electricity and running water - can wait, maybe forever, as long as Jake doesn’t have to come out. He doesn’t plan on Kurt’s vision of his future being as narrow and direct as the single track roads through the trees.

“Your future, your fear, and me,” Kurt tells Jake. “You can have two of the three, so choose wisely.” Jake may have no choices left after they stumble on armed men guarding a beautiful but deadly crop that doesn’t belong among the pines and spruces. Angry men with guns are only one danger in the Colorado wilderness, and Jake’s reluctance to come out is now his smallest problem.

Kurt’s skills and Jake’s quick wits may not be enough to get them out of this mess - how much of the blood shed on the mountain will be theirs?

What listeners say about Blood on the Mountain

Great addition to the series.

Where does Blood on the Mountain rank among all the audiobooks you’ve listened to so far?

Towards the top. I love the narrator and I'm so invested in these characters.

What other book might you compare Blood on the Mountain to and why?

Fall Down the Mountain. Same characters, Author and Narrator with more trouble, just in the Snow!

If you could rename Blood on the Mountain, what would you call it?

Why mess with perfection, the title is perfect.

Jake and Kurt are back where it all started pulling another Ranger season in the Rockies, the two twin cots are stacked in the corner and they are still sleeping on the bed they bought and moved into the cabin. The fridge is still hanging by a rope, buried in the cold water that lies at the feet of the log they made love next to for the first time. And sadly, Jake is still hanging more than just clothes in his closet.

When they stumble upon a field of flowers that should not be in the Rockies, all hell breaks loose and Jake winds up critically injured. It forces him to retire from the Rangers and separates him and Kurt. So Jake has to make a decision, Kurt gave him a choice… “Your fear, your future, and me… You can have two of the three, so choose wisely.”

Let me start by saying that several times throughout this story I wanted to beat the shit out of Jake. Kurt has the patience of a saint I assure you. I was about ready to stop the audio and chalk this one up to a DNF when the proverbial shit hit the fan and suddenly, I was fully invested again. So kudos to Singer for taking me to the brink and then reeling back in again like a flopping sea bass! The circumstance surrounding Jakes injury made my head spin, I can’t say more, let’s just say spoilers, you’ll have to read for yourself, it’s great suspense and personal agony though.

As crazy as Jake drives me sometimes, I’m so invested in these two characters. I have to continue on their crazy, sometimes deadly, and always entertaining journey with them with each and every story. The suspense in this particular installment was taken up a notch from the Ski resort fiasco, I was on the edge of my seat, literally, I almost fell! Finn Sterling continues his role as narrator for Singers words, and I am so happy this author hasn’t gone the way several authors of series have as of late, changing narrators too far into the mix. Sterling has a certain tone set for these two characters… Kurt is the protector, while Jake may be a little bit bigger than him and they are a versatile couple, Kurt always has this protective bravado circling him and Sterling delivers that in spaids.

I got a little misty eyed at the end a couple times. In the hospital and then when Kurt stole the tanker to drive out to the college to see Jake. And let me just say, I adore Jakes mother so much after this book. You’ll see why at the very end, god love her! Anywho, just be prepared for a bit of angst and drama and undecisiveness from Jake for the first half of the book. These guys are so smexy when they get going though that you can’t help but be drawn in.

it is something that is great

I felt so bad for him until he left Kurt in Limbo. But man he took a serious beating.

I wasn't happy he didn't have the nerve to be honest with his mom on his own but it must be hard when the thought of losing your family is at stake, even if it shouldn't be.

Awesome story! Much love for Kurt. Man had the patience of a saint!!!

So much better than I expected! Great story!

If you could sum up Blood on the Mountain in three words, what would they be?

Have you listened to any of Finn Sterling’s other performances before? How does this one compare?

This was his first performance I listened to, but I thought he fit it perfectly. Jake, Kurt, he did perfectly. Then when he read Jake's Mom's parts I laughed. Other times I cried when he read her parts. Excellent narration.