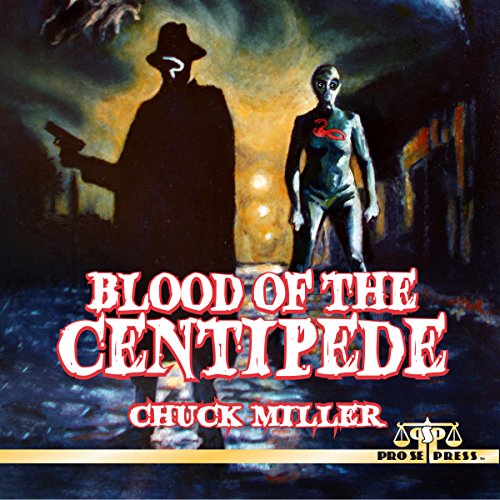 Blood of the Centipede

By: Chuck Miller
Narrated by: Chris Grall
Try for $0.00

At last the untold story behind one of Hollywood's long-lost classics can be told! And Pro Se gets to bring it to you! From the casebook of the mysterious Black Centipede, the true story of his adventures in Hollywood while filming the 1930s classic Blood of the Centipede! Chuck Miller, handpicked biographer of the Black Centipede, finally tells a tale that involves Amelia Earhart, William Randolph Hearst, "Fatty" Arbuckle, and Los Angeles' own masked vigilante - the Blue Candiru - in an adventure stranger than anything that happened on the big screen! Plus, in the Centipede's own words, his first encounter with the enigmatic White Centipede! Blood of the Centipede is the second Centipede novel from the twisted mind of Chuck Miller! Psychedelic pulp at its best! From Pro Se Press! Puttin' the monthly back into pulp!

What listeners say about Blood of the Centipede

How much can a Centipede bleed?

Miller is a real master in his Pulpverse. I relish the way in which he weaves a modern sensibility into a 30's style setting. Zenith City is a place of two worlds, and is filled with real people from the 30's and new characters invented just for the Centipede. This is something that Larry Corriea pulled off in his pulp universe of Hard magic. It is nice to see someone else do it just as well.

Here, the Centipede battles not only Jack the Ripper, but we also get to meet the Black Centipede Eater and the White Centipede, all of whom are out to end the budding career of the Black Centipede. This book is rife with action, excitement, and mystery. Miller knows how to write pulp, and his setting really suits is style. I was surprised that I like the modern style that he injects into the 30's era as much as I do. I wouldn't have thought it would work, but it does. It is kind of like watching a sci fi movie in which everyone spoke 16th century english. Weird, but cool if done right.

Grall is a vocal wizard, and he kills the narration (in a good way). His voice really carries the story, and he drives the pace perfectly. He does great voices, and his narration voice is soothing and pleasant to listen to.

I really recommend this book. Fans of Pulp, superheroes, serial killers, and men of mystery will easily find a soft spot in their heart for this novel. Even though I did receive a promo code for this review it in no way influenced my considerations of the material, and in fact, inspired me to be more honest. In fact, getting a code generally makes me harsher as a reviewer as I am more often concerned what someone like Me will decide based on my review.