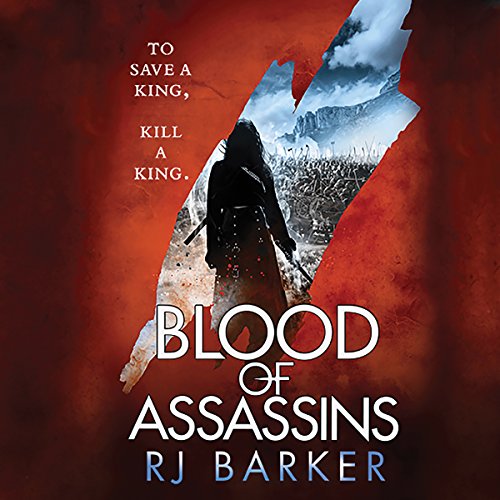 The epic sequel to RJ Barker's fantasy debut Age of Assassins, set in a world ravaged by magic, featuring a cast of assassins, knights, and ambitious noblemen.

In a desperate bid to escape the bounty on his head, assassin Girton Club-Foot has returned to Maniyadoc, but the kingdom he knew no longer exists.

Three kings battle for supremacy in a land ravaged by war-and one of them is his old friend Rufra. With threats inside and outside the war encampment, Girton races to find the traitor behind an assassination plot. But his magic can no longer be contained and Girton may not be able to save even himself.

It's assassin versus assassin for the life of a king.

What listeners say about Blood of Assassins

With Merela incapacitated due to a poisoning and unable to provide him council, Girton becomes much more distrustful of those around him and almost completely loses his prior ability to offer any friendly and comical rejoinders to even the least criticisms or disagreements. He is almost always sullen and, at times, finds himself musing on some of the darker sides of his magical abilities.

Throughout this book's story arc Girton reasoning and actions are that of a man-child and his untethering from Merela's council due to her comatose state causes him to make decisions based on his feelings rather than on deliberated reasoned judgement. Almost all of these makes matters worse for him and those around him. While this makes him a less sympathetic character, it seems that RJ Barker intentionally wanted to convey that twisting within him. In a very real way, he illustrated how young adults forced to shoulder unbearable responsibilities will more often than not make tragic mistakes by grasping for convenient solutions.

I was a bit disappointed that while the whole theme of the book is centered on assassins and, in particularly, Girton and Merela skills, neither of them exercised much stealthy blood work most commonly attributed to that skill.

Liked the story. Sections were a bit slow but overall well done. Pick this up for a fun weekend listen.

slow but worth it

Couldn’t finish it. The main is nothing but a whiny petulant idiot who throws tantrums and believes he is the only one who knows anything despite being proven wrong time and again. Just a beating

I picked this up after listening to the first book.

The devolving characters and their relationships are powerfully written.