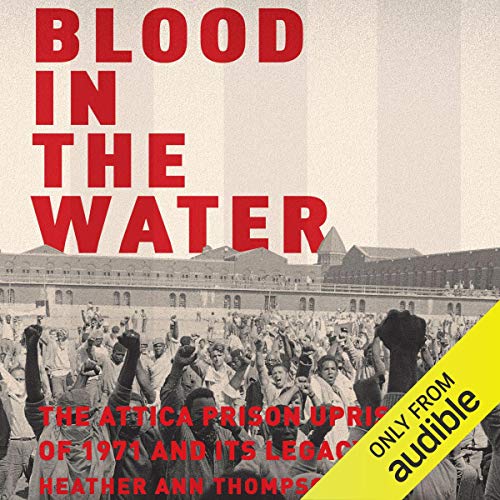 Blood in the Water

By: Heather Ann Thompson
Narrated by: Erin Bennett
Try for $0.00

Winner of the 2017 Pulitzer Prize in History

Winner of the 2017 Bancroft Prize

Named a best book of the year by the Boston Globe, Newsweek, Kirkus, and Publishers Weekly

The first definitive history of the infamous 1971 Attica prison uprising, the state's violent response, and the victims' decades-long quest for justice.

On September 9, 1971, nearly 1,300 prisoners took over the Attica Correctional Facility in upstate New York to protest years of mistreatment. Holding guards and civilian employees hostage, the prisoners negotiated with officials for improved conditions during the four long days and nights that followed. On September 13, the state abruptly sent hundreds of heavily armed troopers and correction officers to retake the prison by force. Their gunfire killed 39 men - hostages as well as prisoners - and severely wounded more than 100 others. In the ensuing hours, weeks, and months, troopers and officers brutally retaliated against the prisoners. And, ultimately, New York State authorities prosecuted only the prisoners, never once bringing charges against the officials involved in the retaking and its aftermath, and neglecting to provide support to the survivors and the families of the men who had been killed. Drawing from more than a decade of extensive research, historian Heather Ann Thompson sheds new light on every aspect of the uprising and its legacy, giving voice to all those who took part in this 45-year fight for justice: prisoners, former hostages, families of the victims, lawyers and judges, and state officials and members of law enforcement. Blood in the Water is the searing and indelible account of one of the most important civil rights stories of the last century.

What listeners say about Blood in the Water

This disturbing book about the Attica Prison uprising is well-reported and well-read. The facts are well-known, but the book was nevertheless suspenseful.

Heather Ann Thompson’s focus on the individuals involved—prisoners, correction officers, state officials and attorneys—shows both their humanity and their frequent errors and misjudgments. Most upsetting was the cruelty and violence inflicted by the guards and state police. The reporting makes clear that the murders at Attica were avoidable and unnecessary. They appeared to arise from a combination of fear, anger, exhaustion and deep racism by those retaking the prison. The resulting cover-up, which reached as high as the governor’s office, was dismaying.

Thompson sometimes showed off her own sympathies too strongly, portraying several of the prisoners as oppressed saints. Oppressed at Attica, yes, but saints? Many (not all) were there for appalling crimes. At the same time, she showed sympathy for many of the overworked guards and their families, especially those guards who found themselves hostages. Not surprisingly, she showed no sympathy for Governor Rockefeller or the officials who fought to conceal the truth and failed to hold accountable those who killed and tortured the prisoners. She presents substantial evidence that the cover-up is still continuing at the state level.

Erin Bennett’s narration was perfect, just the right tone of urgency and controlled outrage throughout the book.

One quibble from a Buffalo native: Thompson repeatedly refers to the Attica/Buffalo/Rochester area as “Upstate New York.” The area is Western New York, not Upstate, as anyone living there will tell you. It’s a long way from New York City.

Not Our Finest Hour. A MUST READ.

I am not at all surprised that Heather Ann Thompson has been awarded a Pulitzer, the Bancroft, the New York Times and various other awards for this book as it is absolutely BRILLLIANT.

This volume is a report based on what actually happened and not on supposition. It is scary, disgusting and shameful. It made me cry, made me angry and made me feel so ashamed of a judicial system that was so blatant in it's bigotry.

Erin Bennett's performance merely adds pathos to Ms. Thompson's words and isn't that what a narrator is supposed to do? She is superb.

Normally I can listen to books as I go about my day in large blocks of time but not this one. I had to 'take it in'. Sometimes I had to re-listen to a chapter or two. Yes, it is that compelling. Sometimes so disturbing that I could not believe my own ears but knowing deep down that it really was true. You only have to 'Google' Attica Prison Images and there is the evidential proof the shame of the DOC and the Sheriff's Dept.

If this genre is your 'cup o'tea' then I highly recommend this book.

A book that America needs to read. As a society, we can't keep going down long hard roads to end up in the same place

A Wonderful HIstory of a True American Tragedy

So much of the meaning of Attica is misunderstood because of the decades of cover-up and lies by the Powers that Be in the State Police and the Governors' office. Professor Thompson was lucky enough to have reviewed materials that were hidden by the State of New York until 2006 and even then it disappeared within a few weeks and is still unavailable to the public. Therefore her well written reconstruction of the causes of the riot, the reaction, the murder and criminal negligence by the State Police and others and then the incredible lying and cover-up of the events by the Executive Office of the State of New York are important. One of the true villains of the matter was George Infante who was elected several times in my hometown of Albany County as Sheriff and then for 17 years as a County Legislator. HIs obituary told nothing of his part in the killing and torture and cover-up at Attica. Thankfully, Professor Thompson has been able to review from multiple sources and interviews the facts leading up to the horrible, unnecessary killings by the State Police and the aftermath and context of the treatment of prisoners in New York and elsewhere. I highly recommend this book.

Too Aplogetic for the Prisoners

There's lots of room to be understanding of the prisoner's perspective, and even their plight. But to call the prisoners honorable just because they declined to take negotiators hostage is over the line. Especially when it is obvious that when they did that the next step by the authorities would be the coming in with the tear gas and Tommie guns.

Story of a Search for Justice and Persistence

Highly recommeded. Very well done retelling of a dark event and those who sought to right the wrong known as the Attica riot of 1971.

A difficult but amazing book. Read on as New York State employees and politicians debase themselves entirely.

I just couldn't get through this one.

This was a very detailed account. Too detailed for me. I lost interest midway through and couldn't finish this one.

This is well-written, with what seemed to be a desire to present the truth and facts about a horrific event in our past. should be considered as required reading for our young people. the extent to which the state went (and continues to go) to deny and cover-up its blatant mistreatment, abuses and slaughter of prisoners and guards is nothing short of amazing, and sad. this is what happens when we the public reward our leaders for "getting tough" on crime.. makes me yearn for the time when we will realize the dignity and worth of every person, without regard to economic level, race, ethnicity, or nationality. as i relate this to today's political environment, i am hoping we can challenge ourselves and our leaders to always seek truth (vs. the story that advances our agenda), and always value free press and open information so that when any of our leaders get off-track promoting a story that suits their purposes, but may be untrue, it can be exposed for what it is.

It’s obvious that Thompson did her homework to pull together and tell this story of a brave group of men that pulled together to advocate for their human rights.

Hopefully, others will invest the time necessary to learn and understand how this event impacted the view many of us have regarding our nation’s treatment of the incarcerated.

This was very well researched and a good listen, despite being a very complicated subject matter. However, there is very little criticism of the prisoners. The book does not examine in detail prisoners who were not interested in reform but rioted just for the sake of it.