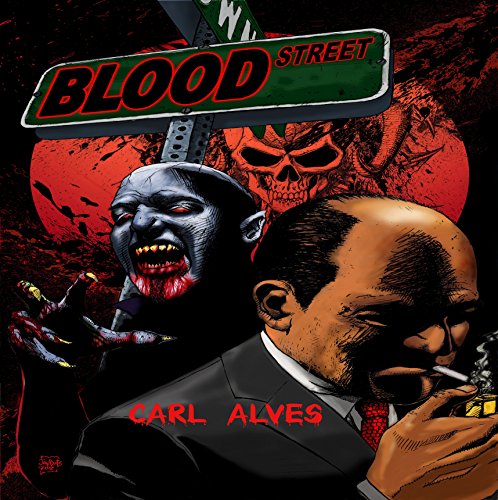 Blood Street is set in the streets of Philadelphia. When vampires tangle with the Philadelphia mafia, one thing is certain: all hell is going to break loose.

Alexei chose the wrong neighborhood in which to claim his latest victim, a member of Enzo Salerno's crime syndicate. Now Philadelphia mob boss Salerno is determined to hunt down the man who killed his associate in such a gruesome fashion - in his South Philly row home - so he can serve his own brand of old-fashioned, Italian-style vengeance.

Perplexed by this unnatural murder, Salerno uncovers clues that lead him to believe that this was not a mob hit, and that a vampire was responsible for the death. Magnus, the leader of Alexei's brood, must use all of his resources to save them from both the mafia and the FBI, sparking a bloody war that plays out in the streets of Philadelphia. Who will survive on Blood Street?

This is not your predictable tale of man vs vamp

What happens when vampires cross into the path of a mob boss?  Blood flows freely on both sides!

Alexei, a centuries old vampire loves to spend time in the limelight and with beautiful people.  He selects his victims with care much like a serial killer.  He selects the wrong victim early on and madness ensues.  Enzo Salerno’s man is viciously murdered and now he wants the man responsible to pay with his own life.   Salerno runs his business in the style of the old-fashioned Italians – with a vengeance!  At first suspecting a retaliating mob hit, Salerno sends his scores of men to the street to find who the responsible party is and exact revenge.  Then he discovers there really are vampires!

Magnus, the leader of the brood of vampires and Alexei, finds he must try to negotiate with the mob boss and the FBI in order to protect his brood.  Alexei’s growing paranoia along with jealousy pushes things further and escalates the deadly encounter.  Salerno successfully strikes fear in the heart of the vampires.  Both sides retaliate with a ferociousness that is mind-boggling!

This is not your predictable tale of man vs vampires; it is full of twists and turns leaving you stunned at the ending.  Carl Alves takes a common theme (man vs vampire) and makes it fresh and unique.  My expectations were that this book was going to be like so many other vampire books but instead I found so much more!   Alves takes the story beyond the norm but keeps it realistically grounded through the human characters.

I found this book to be highly intriguing in many different ways.  Alves builds the story around the conversion to vampirism method, the personality and mentality of Alexei and the characters dancing around one another exacting revenge and delivering messages in a vile and vicious manner.  This is a good book, one that I would listen to again and highly recommend to anyone who enjoys the darker side of vampires and humankind as well as anyone who loves action!  It well written and thought out, there are no holes or issues.

Steve Williams did an exceptional job of narrating; the different accents were spot on and difficult – Philly brogue and Old Russian.  He never messed up or became confused.  I thought he did a wonderful job.  He used his voice to infect the listeners with excitement, fear and danger.  He also inflected confidence and weakness when appropriate. Williams pronounced the words properly and clearly.

Anyone who loves action and adventure as well as vampires, this is your book!

Production quality of the audiobook was very good, there were no issues or concerns.

9 of 11 people found this review helpful