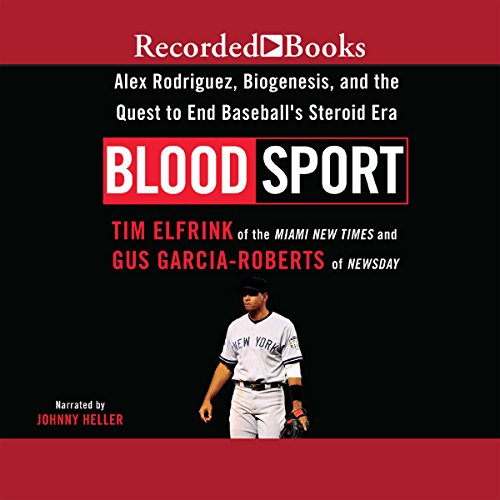 By: Tim Elfrink,Gus Garcia-Roberts
Narrated by: Johnny Heller
Try for $0.00

The definitive, deeply revelatory, and wildly dramatic story of the Alex Rodriguez and Biogenesis scandal, co-written by the reporter who broke the story.

All Porter Fischer wanted was the $4,000 Tony Bosch owed him. But Bosch would not pay him back, so he swiped Bosch’s Biogenesis ledgers as collateral. Fischer eventually examined the lists of clients and treatment plans revealed in the ledgers and saw what he really had: proof that major and minor sports figures came to the Miami antiaging clinic for anabolic steroids, human growth hormones, and other illegal drugs. That included one of the greatest sluggers in modern baseball history: three-time MVP Alex Rodriguez.

When Fischer showed those notebooks to Tim Elfrink, an investigative reporter at Miami New Times, it sparked one of the wildest - and costliest - sports scandals ever. In Blood Sport, Elfrink teams up with Gus Garcia-Roberts, an investigative reporter at New York’s Newsday, to finally tell the full story. A-Rod, an obscenely talented and wealthy, self-destructive man, is one of the book’s central figures.

The tale is rooted in the unique tropical lawlessness of Miami, a city populated with muscle-bulging crooks, spray-tanned fake doctors, and millionaire athletes looking for any chemical advantage. And it’s a chronicle of America’s latest mad quest for a fountain of youth - a billion-dollar obsession with HGH, a drug with uncertain benefits, and even hazier risks backed by a mountain of lobbyist dollars. Seven years after Game of Shadows let audiences experience the characters and drama inside baseball’s performance-enhancing-drug scourge, Blood Sport will demonstrate that the steroid era never ended. It evolved.

What listeners say about Blood Sport

Rough Around the Edges but Enjoyable

If you could sum up Blood Sport in three words, what would they be?

What other book might you compare Blood Sport to and why?

I'm guessing Game of Shadows has some similarities, I am going to check that one out soon.

Did Johnny Heller do a good job differentiating all the characters? How?

Yes, I wasn't thrilled with the first 1-2 hours but in a book regarding this topic it really is important to tell the histories of the people involved and the how competitive advantages have always played some sort of role in athletics.

Did he honestly need them?

I did like this book. The narrator was ok, the story picks up and becomes less scattered and you really will learn about how people cheat in sports. I love baseball and remember this time really well. This book covers many things so if you are looking for a book about pure baseball and the sport aspect of it, this wouldn't be my first choice. If you don't know why people think A-Rod is a scumbag this book in a fair way will show what lengths he went to use PED's throughout his career. It also does an excellent job of holding the MLB accountable when it comes to how they have handled cheating in the past.

Your Look Behind the Curtain of MLBs Steroid Era

Would you try another book from Tim Elfrink and Gus Garcia-Roberts and/or Johnny Heller?

The draw for me with this book was the behind the scenes look at baseball in the steroid era, past and present. Although at times I wished there was less content on Tony Bosh and more on the MLB, I still wasn't disappointed.

What other book might you compare Blood Sport to and why?

The Yankee Years by Joe Torre and Tom Verducci because both books give Major League Baseball fans a great behind the scenes look at the sport they love.

Did Blood Sport inspire you to do anything?

Not to take Performance Enhancing Drugs in the Miami area.

In many ways Blood Sport is the peak behind the MLB's PED curtain that you've been waiting for.