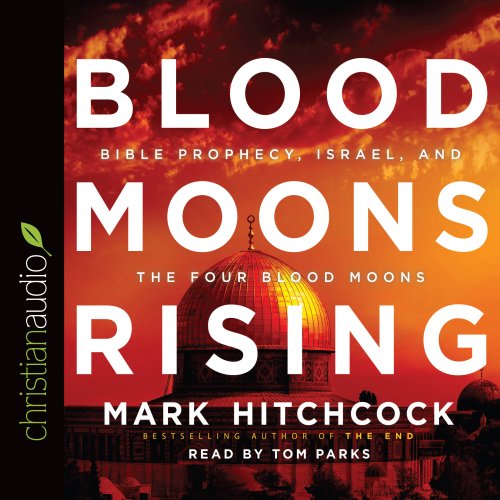 By: Mark Hitchcock
Narrated by: Tom Parks
Try for $0.00

Has the final countdown to the end days begun? Are the heavens telling us we are nearing the end? Astronomers have noticed it is coming. Historians have noted its significance. In 2014 and 2015, there will be a phenomenon in the skies of four blood moons falling during Jewish feasts. This has only happened three times in recorded history: 1493-94, 1949-50 and 1967-68. Each time these dates have had extraordinary significance for the Israelites.

From the discovery of the New World to the creation of modern-day Israel, these years of the four blood moons have truly been turning points in history. Bible prophecy describes the moon being darkened and turned to blood. What is the significance of these signs in the skies? What will the future bring? Prophecy expert Mark Hitchcock guides you through the relevant Bible passages so you can understand the times in which you live.

What would have made Blood Moons Rising better?

The 4-1/2 hours I spent listening to this book I felt like I was listening to a PC (Prophetic Correctness) cop. I heard a lot of bad attitude toward Hagee in this book in spite of the authors "disclaimer" in the beginning of it. I kept waiting for the book to get off the Hagee train and get better but it didn't.

I've never been a fan of John Hagee but I do like his book, The Four Blood Moons. Is it 100% correct? Of course not! Neither is this one! Both of these guys are human and subject to the flesh. Hagee's book however can (and hopefully will) cause many to come to a realization they need Jesus. I can't see this book accomplishing that at all.

Hagee's book will stir you and challenge you to do some self-evaluation about your relationship and walk with the Lord as well as instill within you a sense of urgency to seek and serve the Lord more diligently now than ever. This book does nothing of the kind.

Hagee's book also brings you to the realization that our time 'may" be very limited and it's time to quit being "religious", "playing" church and get out there and "be" the Church. It's time for us all to be "Andrews" and introduce our friends and loved ones to Jesus.

I received ZERO inspiration and even less edification from this book. I do have some of the same disagreements and differences of opinions as Mark about Hagee's book but I don't have the desire nor do I feel it's my calling or duty to write a book to express my opinions and understandings at someone else's successful expense. Obviously, Mark Hitchcock did.

I've just recently joined Audible and started listening to audio books and I love it! I listen to them during my commute to and from the office and while I'm working.

I'm going to listen to some books on prayer and fasting. I've recently listened (obviously) to John Hagee's "The Four Blood Moons", Jonathan Cahn's "The Harbinger" (a few times each) and "Fresh Wind, Fresh Fire" by Dean Merrill and Jim Cymbala.

All three books have (as I mentioned before) have stirred and challenged me to dig deeper and draw closer to the Lord. I do believe prayer and fasting will help accomplish this. He did tell us if we draw close to Him, He will draw close to us.

I felt like the narrator actually did an excellent job expressing the intent of this book and the spirit in which it was written. This is a compliment to the narrator, not the author.

As far as I'm concerned, no! Seems to me that Mark had more motivation, interest and and desire to discredit John Hagee's book than to use this opportunity to write something that would edify and encourage it's readers. He could have (and should have) looked at and written about the possibility that the four blood moons of 2014 and 2015, falling on Passover and Sukkot in a Shemitah, feast of Trumpets year just might be more than just a coincidence. In no way am I taking Hagee's book to the bank, but I am sending this one to the trash.

I actually felt somewhat angry listening to this book. Emotions (as we know) are transferrable and the attitude in which this book was written and narrated was being transferred to me and I did not like it. I was expecting and hoping to hear something additional, something positive, thought provoking, additional perspectives, challenging, and fresh in this book about the four blood moons but there was nothing.

Instead, In my opinion Mark Hitchcock used the popularity of John Hagee's book as a platform to get his differences of opinion out there and at the same time, profit from it. I equate this book to that of a Monday morning sports talk show telling everything the winning quarterback did wrong the day before. Yeah, I know I said "winning" quarterback.

Hagee's book, even with it's faults, theoretics and inaccuracies, in my opinion is very evangelistic and extremely thought provoking. I felt this book was just argumentative. Even though there's some validity of the content of this book, the messenger's method of delivery, ruins his own message. In many cases (this book being one) you can present and promote your side, your understanding and/or your opinion of something without even mentioning the one you don't adhere to or agree with and gain much attention, respect and favor.

With that said this book reminds me of those sickening trash talk political ads we always see during election times. The ads that give you a million reasons why not to vote for their opponent but no reason to vote for the one running the ad.

This is the first book of Mark's that I've read (listened to) and pretty safe to say it's also the last. I'm sure Mark has a much better grip on the prophetic and the Word than I do but his writing style tells me he's a fight looking for a place to happen. We don't need to be fighting each other when we have an enemy out there seeking one of us to devour.

We stopped going to a church due to the pastor using his platform and our attention to tell us what he didn't like and what he disagreed with week after week. This method of his communication (like this book) does not encourage or promote spiritual growth and Christian unity but the opposite.

This book confirms you can't judge a book by it's cover. The four blood moons along with all of the other things happening on the special days in which they are might not be anything as Mark Hitchcock wants you to think. But then again, they might. If nothing significant come from it, no big deal. If there is prophetic significance and 2014-2015 is a time for major Biblical prophesy fulfillment to take place, are you ready?

Well worth reading. A lot of information.

It is a nice book to have in your collection.

Full of answers and was a really great read! I highly recommend this book to anyone who is interested in Revelations.

Great book and explanations on Blood Moons and other prophetic events. I would recommend this book to all my friends