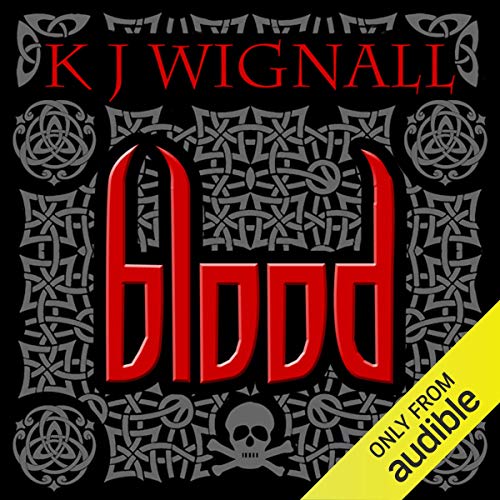 “I do not remember being bitten. I wish I did, for then I would know the creature who did this to me and I would have a purpose, to track him down and repay him for the poisoned gift he gave me.”

Back in the Thirteenth Century, Will was destined to be Earl of Mercia, although he never lived to inherit his title. In the centuries that follow, Will has led a lonely life, learning to deal with whatever the present day throws at him, always searching for answers but never finding any. Until this time, when he awakens after a 20-year-slumber, hungry for the blood that sustains his undeath, when it appears that he is finally getting a glimpse at why he exists. He does indeed have a destiny, and an enemy, but revealing that fate will be a matter of trust....

Would you consider the audio edition of Blood: Mercian Trilogy, Book 1 to be better than the print version?

I would say yes. I haven't had the opportunity to read the print version but Carl Prekopp is a SPOT ON narrator for this story. He really feels the characters and becomes them.

What other book might you compare Blood: Mercian Trilogy, Book 1 to and why?

Anne Rice's vampire chronicles. Particularly Queen of the Damned. This story gives a similar feel to Lestat's rise but it holds its own as story. William Mercier is a very intriguing character. From his age to his era to his minimal knowledge of his condition. The book is well written. I also gathered the feel of the great Highlander Stories, a hint of history and hunting each other. The environment and tactics of battle lend to that as well. Add in the twinkling nature of Potential other "Gifts" and you get a sense of The Professer Xavier. The book is well written with lots of detail but not "congested" The story ends with the reader wanting more but perfectly open to hunger for the next book in the trilogy.

Which character – as performed by Carl Prekopp – was your favorite?

William the Earl of Mercier. He really becomes him. I thoroughly enjoyed Prekopp's narration as Nathan in "Half Bad" by Sally Green. I loved his voice and his passion. Prior to getting this audible I was concerned that it would be a great job or a bust. Nathan is a witch, William a vampire, different characters but typically very similar in cadence, accent, darkness, etc. Prekopp did beautifully. In the beginning it sounded very much like Nathan and that character was very fresh in my mind still, but after a few pages it was very clear this was not Nathan but in fact was William Mercier and Prekopp OWNED it!! Just as he had with Nathan he became William. You could feel him standing right there talking to you. You could imagine your being right there in that place he was speaking of. Average narrators still feel like they are simply reading of a page, not with Prekopp. Even when he changed his voice to speak as another character in the book, each one was distinct and unique. you never had to remember who was speaking. It also plays to the novel itself in the way it is written. Wigall and Prekopp a perfect match!

Yes it is!!! I was forced to stop momentarily but only for a few short times. Very enjoyable!

If you like Vampires and want a younger feel, this book is very worth the read and the listen!

Loved it - wish it were longer!!

Another different vampire book....reminds me of Discovery of Witches...really good story - trying to understand what's going on - suspicious people...friend or foe....
The narrator is outstanding!!! Extremely well written!
Couldn't wait for the next; already nearly half through the next in the series!
Highly recommend - only wish this were longer!!

A vampire novel to sink your teeth into.

Would you consider the audio edition of Blood: Mercian Trilogy, Book 1 to be better than the print version?

The scene between Will and his brother.

In a genre littered with mediocre offerings, this really stands out. The Author doesn't sugar-coat Will's vampire nature, while at the same time managing to make him a sympathetic character. The interaction between him and Elouise is brilliantly done and the differing first and third person perspectives add variety.

Much more than just another YA vampire story

I really enjoyed this. I tend to prefer supernatural stories set in the UK. The main protagonist, Will, is initially an ambivalent figure but gradually becomes more of a traditional hero. He's likeable but retains the sense of being otherworldly and of another time. The heroine, Eloise, also becomes gradually more interesting. I like that she's feisty and intelligent (yes, I'm contrasting her with Bella Swan) Although Will's city is a fictional amalgam of several locations it manages to have a real sense of place and history.

The story does have a conclusion but you won't get many answers at the end of this volume. K.J. Wignall has created a new vampire mythology whichwe only get a glimpse of here but I found this intriguing enough to want to hear the rest of the story.

Carl Prekopp is excellent and captures the mood and voices very well.

Where does Blood: Mercian Trilogy, Book 1 rank among all the audiobooks you’ve listened to so far?

One of the best due to the excellent story and superb narration, beautifully paced and the narration performed to perfection.

The story pulsated with ancient and modern events interwoven with the characters involved, clearly described with not a word wasted. Very easy to see the story as a film being played out as you listen.

Which character – as performed by Carl Prekopp – was your favourite?

At times the descriptions of feelings and events are very poetic and add to the Gothic intensity of the story.

Could not wait to listen to Book 2 of the trilogy.

Having listened to the half bad trilogy read by Karl Prekopp, I’d been looking for other audio books that live up to the standard of half bad. This is not quite as good but a close second. Karl Prekopp is one of my favourite performers on audible and he doesn’t disappoint here.

Narrator is superb, story rather hackneyed

I arrived at this book as I love Carl Prekopp's narration and he didn't disappoint. The story however was simplistic, and while not entirely predictable throughout, it certainly didn't have anything new to offer. Unlike the Twilight series, which although written about teens was eminently readable, in this story I just couldn't connect with the characters and found the plot jejune. But if you are looking for an easy, simple listen with the most excellent narrator known to humankind this is your book.

Not a bad book but very short, seems audible cashing in and doing it over 3 books as it could be just the one book !!