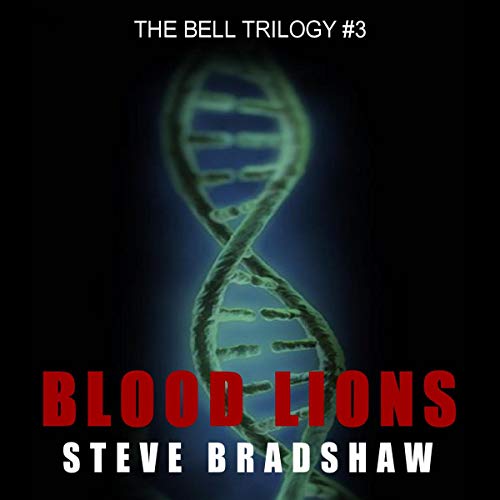 World-renowned forensic sleuth Dr. Elliott Sumner believes the nightmare is over when heads of board members are found, and a serial killer is dead. But three in Cape Town resurrect a sinister plot to control a genetic mutation with profound implications.

When the groundbreaking formula surfaces with a message from the dead geneticist, Elliott knows only he can take the anti-aging biologic to the world. Doubting such fantasy and reluctant to engage in a hopeless battle against deadly minions, Elliott's worse fears are confirmed. In a desperate bid to survive, Elliott faces an impossible mission.

Can he infuse the world population, or will the biologic be controlled by the sinister few? As his doubts turn into wonder, Elliott realizes he must unite with a real monster, or the greatest evolutionary leap for mankind will be lost.

This is a new second edition authorized by the author.

What listeners say about Blood Lions

A thrilling end to this outstanding trilogy. The action never stopped with twists and turns, never knowing who could be trusted and keeping the suspense going right to the end. Although complex the author manages to explain the science in a way you can understand and makes you think about how much of it could really happen. The narration was just right for the book, managing a number of characters. A fitting end to these amazing books.

I can’t believe this is the last of these guys!
I’ve thoroughly enjoyed the major crazy things they’ve got up to, had to battle through & the family lines of immense torture & secrets.

Extremely worth a listen. From 1 up to 3.

This final part of the Bell Trilogy is the best yet! It is exciting, edge of the seat, page-turning stuff and I really enjoyed being part of Elliot Sumner’s world again. I can’t believe this is the final one :-( As usual the storyline was complex, but I was still able to follow the different threads to a dramatic, satisfying conclusion.

Once again the book is narrated by Stephen H Marsden who did a terrific job building the tension.

Wow here we go on a rollercoaster ride to the finish

What a great end to the trilogy. We finally get to the bottom of the fountain of youth that the secret society have been chasing for so long and unmask them all so things are finally brought to a head in only the craziest and scary way possible as the other books in this trilogy have shown. Will anyone get out alive in the end maybe even super strength and special skills won’t be enough. This book and author does not disappoint.

This was a delightful final instalment of this fabulous series - once more we are thrown into the fray of complex plot lines, plenty of characters and hair raising developments, as per usual masterfully crafted and woven together by the author, culminating in an exciting ending. The wonderful narration by Stephen H. Marsden adds an extra level of enjoyment and brings it all vividly to life.
Brilliant thriller trilogy and a brilliant audio experience!