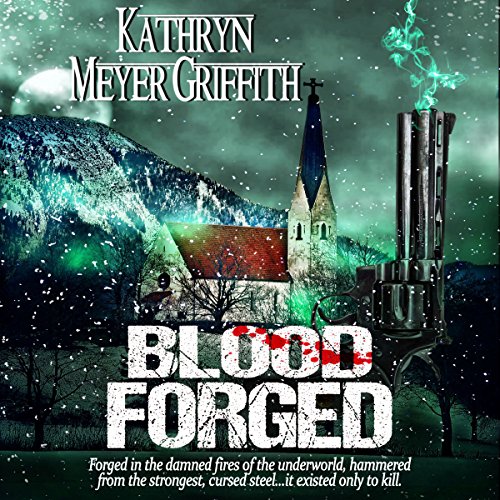 By: Kathryn Meyer Griffith
Narrated by: Marilyn Ghigliotti
Try for $0.00

An ancient snake-demon lays trapped behind the stone walls of an Incan prison, for centuries demanding blood sacrifices and scheming to escape. Then it discovers a pathway into the world of men, forging itself into a malevolent 357 Colt Python, and making itself capable of incomparable destruction and misery. Through decades it torments, decimates, the unfortunate people whose lives it comes into until a loving married couple, Emily and Sam Walters, have enough love and faith - and the help of a mysterious priest who's much more than he appears to be - to fight against and destroy it forever - and to send it back to hell where it belongs.

What listeners say about Blood Forged

This was a great story! I've read/listened to a couple others by Kathryn Meyer Griffith, and have loved them all. This is no exception - awesome story!! I love the premise about a demon taking over a 357 Colt, nothing good can come of that! :) I thought the story was riveting, creepy, and the narration was great! Really enjoyed, I'd definitely recommend it to anyone who enjoys the genre, and even those that maybe don't! :) Great job!
I was given this free review copy audiobook at my request and have voluntarily left this review.

I really enjoyed this book. It is about a gun that is imbued with evil and changes everyone who comes to possess it. I especially liked the beginning of the book that tells the origins of the gun. The situations and dialogues that resulted from one possessing the gun were absolutely chilling! This book kept me on the edge of my seat, and I kept wanting to know what would happen next. I listened to the audio version of this book, and I thought the narrator, Marilyn Ghigliotti, did a good job, even with the male voices (it is always a test for me how a narrator does the voices of the opposite gender). I enjoyed her narration, and would listen to her again. Overall, this is a great book for those who like paranormal horror/suspense.

A gun posessed by an evil entity. This book was awesome! We get to know several small groups of people at different times throughout the book. At first I was a little confused by this, but at some point I realized all these people knew each other in some way. It was really interesting to see how each person was effected during the story. The narrator did a great job bringing the story alive. There were some truly creepy moments, and she made it even creepier. I really enjoyed this audiobook, and I'm excited to read another book from this author!
I was provided this audiobook in exchange for an honest review.

I liked this book.We start out in ancient times where a snake demon has been walled up so it can harm no one else.It was feeding on vrigins.Year later it's wall is opned releasing it into a rifle.Anyone who touches it becomes obsessed with it and the demon takes over.It sweeps thru a police force leaving destruction in its wake.One woman,one Priest and one psychic seem to be the only ones that know what to do to get rid of it BUT will they be seduced by the demon themselves?
Marilyn Ghigliotti is a wonderful narrator and is convincing in all her characters voices.
"I was provided this audiobook at no charge by the author, publisher and/or narrator in exchange for an unbiased review via AudiobookBlast or MalarHouse dot com"