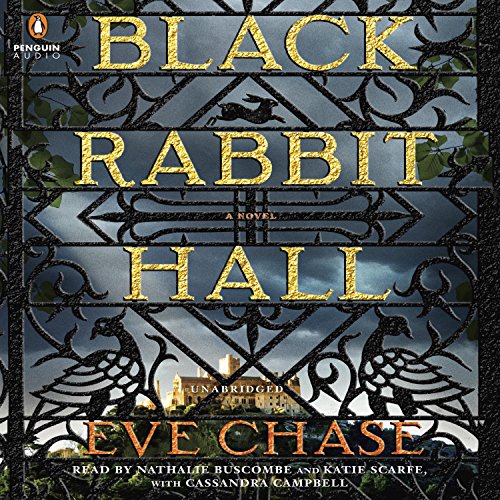 Ghosts are everywhere - not just the ghost of Momma in the woods but ghosts of us, too, what we used to be like in those long summers....

Amber Alton knows that the hours pass differently at Black Rabbit Hall, her London family's country estate, where no two clocks read the same. Summers there are perfect, timeless. Not much ever happens. Until, of course, it does.

More than three decades later, Lorna is determined to be married within the grand, ivy-covered walls of Pencraw Hall, known as Black Rabbit Hall among the locals. But as she's drawn deeper into the overgrown grounds, half-buried memories of her mother begin to surface, and Lorna soon finds herself ensnared within the manor's labyrinthine history, overcome with an insatiable need for answers about her own past and that of the once-happy family whose memory still haunts the estate.

Stunning and atmospheric, this debut novel is a thrilling spiral into the hearts of two women separated by decades but inescapably linked by the dark and tangled secrets of Black Rabbit Hall.

"The ominous tone of this audiobook draws in the curious listener from the first scene. Three narrators collaborate, stitching together the lives of the characters in a seamless listening experience.... Buscombe, Scarfe, and Campbell create artistic portraits of each character, including the gruff masculine ones." (AudioFile)

“For fans of Kate Morton and Daphne du Maurier, Black Rabbit Hall is an obvious must-read, but it is sure to please any reader who delights in devilishly thrilling dramas." (BookPage)

“Like the setting of Robert Frost’s "Stopping by Woods on a Snowy Evening", Chase’s novel is lovely, dark and deep." (Richmond Times-Dispatch)

A good story in the Kate Morton school of writing.

I'm not sure I would as I really found one of the narrators very hard to listen to.In fact, she starts the story and I nearly gave up with the whole thing because of her. She has a terribly grating tone and their is something innately annoying about her. She manages to make Lorna and John terribly annoying too. I couldn't like Lorna because of the whiney voice the narrator gives her which makes her seem very weak. John is made overbearing and patronizing by what I think is overacting on the part of the reader. I have a feeling I would have enjoyed this story far more if I had read it myself. I would be likely to recommend the book, but not the audio.

Lucian because he was brave and honorable and kind.

Would you listen to another book narrated by the narrators?

All the losses were very moving and unsettling. I hated what happened to poor, Old Harry.

This is a good story which is most certainly in the school of Kate Morton. I wish the main character of Lorna had been portrayed as stronger and more positive, but I think a lot of my dislike of this character must stem from the narrator. I think I will avoid audiobooks that involve Nathalie Buscombe.

A story that works into your soul

A mixture of love, horror, and the truth behind it all this is a strong novel that forces the listener to picture the haunted lives that are linked through time. Few books leave me rethinking my own darkest moments and thoughts but this one did, it will be with me for a long time as one of my favorites.

If you love Kate Morton

If you love Kate Morton, Black Rabbit Hall is a must read. Like Morton, Eve Chase weaves together rich characters with scenery so breathtaking, it almost becomes a character itself. The storyline made me never want to pause. I loved this book and look forward to more books by this author.

I am SO glad that I took a stab in the dark and picked this audiobook. I am a commuter, so I listen to all of my books in the car. I was so captivated by the story and performance that I found myself turning on the story in the house too. Descriptive and dark, Eve Chase has done a splendid job. I enjoyed the ending of this book as well...I won't spoil it for you. If you enjoy feeling like you know the characters personally after reading a book, then you will want to give this one a chance.

black rabbit hall, wish it could have gone on...

the narrator was really good I really enjoyed her! the kind of story you wish could go on and on further into the future with the family be able to know what happened to black rabbit hall afterwards thought that was Toby coming but wasn't sure of that. use the book for traveling 426 miles each way still wish it could have gone on

Had me quessing right up until the end. very entertaining. I will listen to this one again.

Great book Go ahead and fall down the rabbit hole too.

Good adventure I have just poked my head up from the rabbit hole. Blinked and returned to present day and time.

There were some interesting twists and turns. some warm and fuzzy moments mixed in with the tragedies of real life.

LOVED. THIS. BOOK!♡♡♡ Such a great story! Narration was flawless. I was obsessed from start to finish.

I feel like I know each character....very good story...ending was perfect !a must read