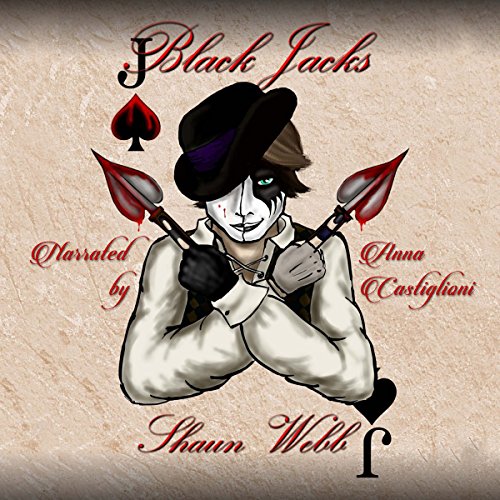 Someone is committing murder in Flint, Michigan, leaving a black Jack of Spades as a calling card. Jack Beauregard, a state trooper Colonel with gubernatorial aspirations, is desperate to solve the case and secure the election. Circumstantial evidence points to a cantankerous old local, John Garrison. Amy Fraser, a beautiful and aggressive defense attorney, is hired to represent him, but Amy has demons of her own. Abused as a child, she is haunted by recurring visions and ghostly apparitions. She fights for John, and for her own sanity.

Despite a lack of adequate evidence, Beauregard continues his quest to railroad Garrison; his political ambitions more important to him then the truth. Several subplots evolve around a bevy of small town characters.

Find out what the real truth is, or isn't, in Shaun Webb's gripping mystery novel, Black Jacks. The game begins, and Jacks are wild.

What made the experience of listening to Black Jacks the most enjoyable?

The narrator was so well-versed and her voice inflections were right on the money.

Yes. There were multiple plot lines and the writer brought them all together very well.

Have you listened to any of Anna Castiglioni’s other performances before? How does this one compare?

Can Amy defeat her ghosts and save the old man from death?

Very well done. I will be looking for more titles by these artists.

Found story engaging, but read to quickly. Not enough pause for effect. I slowed the speed. But still hard to enjoy story.

Absolutely. I love the characters I created, especially Amy. It was a lot of fun to write.

What was one of the most memorable moments of Black Jacks?

Amy's face-offs with Jack Beauregard. The chemistry was great. Also Amy's confrontations with her "other" self.

Which character – as performed by Anna Castiglioni – was your favorite?

Old Man Garrison...hand's down. She nailed the old geezer.

As I was writing it, I never knew which way it would shift. I went with the flow and let the book basically write itself.

Nice narration by Anna Castiglioni. She handled the characters with enthusiasm.