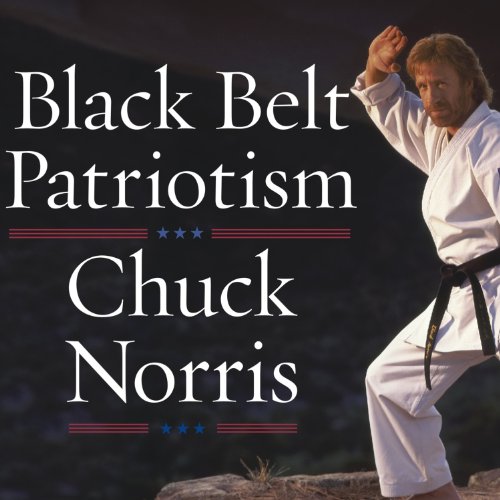 By: Chuck Norris
Narrated by: Alan Sklar
Try for $0.00

Martial arts master, actor, and political activist---there is no job Chuck Norris can't do. Now the original tough guy is at it again, stepping back into the role of best-selling author with his new book.

In Black Belt Patriotism, Norris takes no prisoners in his assessment of American culture, tackling everything from family values to national security. More than a cultural critique of what's wrong with our nation, Black Belt Patriotism provides real solutions---not superficial band-aids---for solving our problems and moving our country forward. Norris shows us how we can get involved, make a difference, and change our nation's course for the better. Chuck Norris---the hero, icon, and legend---is back, packing a political and cultural punch as only he can deliver.

Chuck Norris researched for this book. He covers many points, and shows you how the United States founders were men of faith. He also speaks on healthy eating and living. If you're one of the people who appreciates historical revision this book isn't for you.

Would love to see this update for 2021

Loved it, America eeds to hear this. Unfortunately, it maybe to late for us now.

not what is expected

less than the straightforward approach I'd hoped for. didn't waste time finishing this audio book

What would have made Black Belt Patriotism better?

This book was clearly researched only to find support for the authors arguments. It fails to address opposing arguments or to find any common ground. The book is intellectually dishonest and is often contradictory. While the author claims to espouse liberty he clearly would take away any liberties you posses that he doesn't agree with.

Has Black Belt Patriotism turned you off from other books in this genre?

No. However, this book could have been more honestly titled "Black Belt Patriotism: How to Reawaken America with Christian Values."

The performance of Alan Sklar was outstanding and the only thing that kept me listening to the audiobook.

If you could play editor, what scene or scenes would you have cut from Black Belt Patriotism?

I would have never published this book.

Chuck Norris is clearly a very devout Christian and passionate about his faith. Instead of offering just the problems with America he also offers solutions. However, if you are a believer in the separation of church and state avoid this audiobook. I often had the opening scenes from "Escape from L.A." in mind while listening to this book. I've been a fan of Chuck Norris for years because of his martial arts accomplishments, and was very curious of what his political philosophy would be, but this book is a perfect example of why you should "stick to what you're good at."