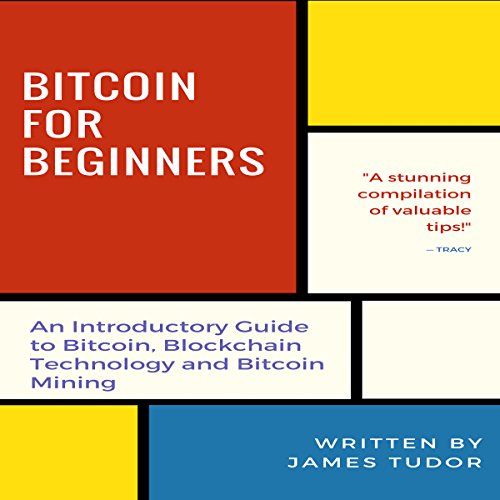 By: James Tudor
Narrated by: Randal Schaffer
Try for $0.00

If you want to understand more about Bitcoin, the blockchain technology, and how to mine for Bitcoin, then pay attention....

According to a Nasdaq article, when gold and Bitcoin were compared as investments over the last five years, Bitcoin greatly outperformed the precious metal, generating an annualized return of 155 percent compared to gold’s annualized loss of six percent during the same period.

One thing is clear, Bitcoin is a promising investment vehicle, but how is an average user supposed to grasp the intricacies of this up-and-coming digital currency?

This audiobook will provide you with the guidance you need.

In this audiobook, you will discover:

Are you ready to delve into this exciting world of Bitcoin? If so, download this audiobook, and let's get started!

What listeners say about Bitcoin for Beginners

The best audio-book for blockchain

It is the best audio-book of how blockchain is explained to everyone even for people who do not master many of the technological and mathematical concepts. I recommend everyone who has just started and those who already have time in this world to expand their knowledge and develop new ways to explain this disruptive technology.

It's a great listen

This is not a technical treatise on Blockchain.if you're looking to understanding the potential of the blockchain landscape. It's packed full of interesting tidbits and insights. It was carefully researched and explained... and I appreciate that effort!

The books are factually right without bogging the reader with unnecessary detail. It is also very recent and time is important in everything bitcoin-related. What was true three months ago it may not be of any influence today as the market forces form public opinion and investors.

I loved the book.

The book describes bitcoin and why it is such a revolutionary technology. It goes on to investigate the identity of Bitcoin's creator. The author is clearly excited about this technology and it can't help but rub off on the listener. A must-listen for anyone interested in currency/technology and the future of money.

I think it is important to be informed about alternative forms of currency that no one entity has power over.

This audible book is well

This audible book takes the complicated and sometimes confusing topic of alternative currency and breaks it into comprehensive explanations.

I suggest buying them together.

I started with Inventing Bitcoin which helped give me foundation. Next, I listen to the Bitcoin Standard. If you don't own either, I suggest buying them together.

Best Book on Bitcoin Hands Down.


\\Best Book on Bitcoin Hands Down. I say this as someone that has been in Bitcoin for a long time and has written a lot on the subject for the past few years. This is the best treatment of Bitcoin and money out there.

The author explained this audio-book brilliantly

Short but sweet overview of the blockchain. I had literally zero understanding of how blockchain works prior to this listen to this, but can now hold my own in a conversation, and know which pieces interest me more, so I can narrow additional listen and research to those parts.

I adore this audio-book

I liked very much the institutional and social aspects of the distributed ledger technology. It was a surprise for me to understand that coins do not exist, not even in digital file format. The deep explanation of hashing is also very useful.

I enjoyed listening to this audio-book and found it very informative as this was my first encounter with anything blockchain technology-related. Very informative. listen to it on my kindle.

It was really able to help me.

This audio-book is short and to the point and great for anyone considering investing or going into this field. It was really able to help me.

It teaches you how to invest and start a business using cryptocurrency. It explains how traditional systems work and the differences between them and these new systems as well as the pros and cons of everything. You learn about the power of banks. It is worthwhile and thought-provoking listen.

A good summary of blockchain applications, along with a brief discussion of its underlying algorithms. The audiobook has a good mix of business and technical views. A nice read for those who already have a slight knowledge of Bitcoins and the like.

I finally decided to look into it.

I started with this book and it was perfect. Easy to follow language with a great history of the blockchain. If you are curious about what blockchain is, this is a great place to start.

This book is the perfect way to gain a better understanding of bitcoin and blockchain. The author does a great job making bitcoin easy to understand and gives us step by step instructions to make it easy. Highly recommended.

For anyone who wants to start investing in bitcoin or just wants to learn more about it, this audiobook is great. A variety of topics are covered, such as mining, buying, selling, and security, etc. I love the straightforward practical approach.