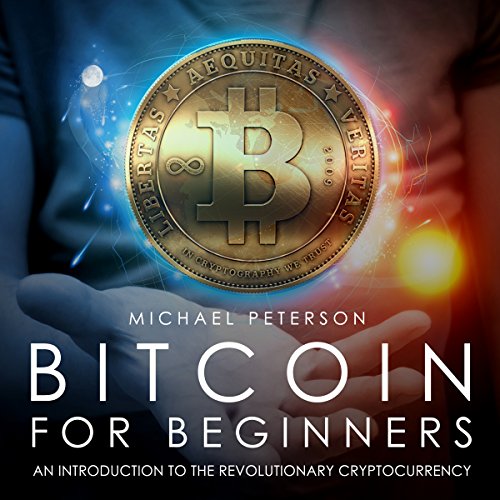 Bitcoin for Beginners: An Introduction to the Revolutionary Cryptocurrency

By: Michael Peterson
Narrated by: Jimmy Kieffer
Try for $0.00

It's not an actual coin, it's "cryptocurrency", a digital form of payment that is produced ("mined") by lots of people worldwide. It allows for peer-to-peer transactions instantly worldwide, for free or at very low cost.

Bitcoin was invented after decades of research into cryptography by software developer Satoshi Nakamoto (believed to be a pseudonym), who designed the alogorithm and introduced it in 2009. His true identity remains a mystery.

How does Bitcoin work?

Internet users transfer digital assets (bits) to each other on a network. There is no Online bank; rather, Bitcoin has been described as an Internet-wide distributed ledger. Users buy Bitcoin with cash or by selling a product or service for Bitcoin. Bitcoin wallets store and use this digital currency. Users may sell out of this virtual ledger by trading their Bitcoin to someone else who wants in. Anyone can do this, anywhere in the world.

There are smartphone apps for conducting mobile Bitcoin transactions, and Bitcoin exchanges are populating the Internet.

What listeners say about Bitcoin for Beginners: An Introduction to the Revolutionary Cryptocurrency

I have listened to a few short audiobooks about crypto currencies in the last couple of months. This one had some really interesting historical bits that I found really fascinating.

Get set up to deal in these markets today. This audiobook might not answer all of your questions, but it will give you enough to start asking the right questions. This would be a helpful intro for anyone interested in getting into the game.

The content was well organized and the narrator did a great job.

Enough information to get started

Bitcoin for Beginners is a great introduction to the world of Bitcoins. Anyone who is interested in starting to trade could do so with the information provided here. Just keep in mind this is a grand overview. It sparked my interest enough to do more research and possibly start purchasing/trading some bitcoin.

I requested a free preview copy of this audiobook and I am leaving a voluntary review.

Informative description of Bitcoin on it's beginnings and inner workings.

This was a decent, high level, overview of Bitcoin. It was not that technical and gave a 30,000 foot view of what Bitcoin is. I'm not sure it provides enough info to actually get started using Bitcoin, though. If you are looking for a quick "cliff notes" overview then I would recommend this. If you ACTUALLY want to start using Bitcoin, you'll need to do a LOT more research.

Slowly I am working on learning about bit coins and other cryptocurrency and how they could effect my life. This book explained things on a basic level and helped me focus m,y questions so I can do the research I want not waste a lot of time chasing down dark alleys of information.

A Good Primer For Crypto

I highly recommend this title for anyone who is interested in learning about crypto currency. Informative and easy to follow. Nicely done. I was provided this audiobook at no charge by the author, publisher and/or narrator in exchange for an unbiased review via Audiobook Blast

'Bitcoin for Beginners" is short introduction to the history of Bitcoin, how it differs from traditional currencies, and the nature of current events regarding it. All this it does well, except that at times the author refers to events without giving the listener an account of said events. Perhaps intentionally (e.g. for simplicity's sake) it focuses on Bitcoin alone, and predominantly on how it's affecting the world and could affect you. This could be a positive point for some. It neither describes other cryptocurrencies nor the details of the technology itself, though it does cover at least the key points of the latter. I think more content addressing these could have been beneficial.

As for the reader, he was clear and sounded reasonably engaged.

Neither for the beginner nor technical...

I would not call myself a Bitcoin fanatic, but I'm an enthusiast of the concepts and reasons the new currency was developed. From its inception, I have followed the Bitcoin cryptocurrency as it grew from obscurity to being nearly fully mainstream today. The technology has also spired many spin-offs in the field of cryptocurrencies, yet there is so much more to Bitcoin than just its outer shell. I am more a fan of the underlying blockchain technology and the potential impact it has on future transaction-based systems than Bitcoin itself. In full disclosure, at the time of this review, I do not own any Bitcoin or any other cryptocurrencies.

The book, "Bitcoin for Beginners: An Introduction to the Revolutionary Cryptocurrency" was written by Michael Peterson and the audiobook edition was narrated by Jimmy Kieffer; who appears to be a newer narrator on Audible. The book is quite small at 32 pages or 29minute for the audiobook. It is intended to be a primer for the beginner who is interested in Bitcoin. Let me say up front, I did not feel this book was either for beginners interested in dipping their feet into the technology nor was it intended for the more technical person interested in Bitcoin. I found it difficult to understand the author's intended audience as he often spewed terms or concepts that most people who are unfamiliar with Bitcoin would be lost hearing. Often, terms or acronyms were used throughout the book but never defined or explained. Even common terms such as a "Bitcoin wallet", were not given the necessary focus to be clear to a new comer. This does not even touch on helping one understand the different types of wallets and why would want one over the another. Very simply, they say something like, "get a wallet from a reputable seller…". I'm a technically savvy person, and I found following the book confusing, I think more beginners would be frustrated reading this book.

Although the book was rather newly published, at the time of this review, most of the details provided were either incorrect or not up-to-date. The authors assertion that Bitcoin transactions are fast is simply not accurate. Most Bitcoin transactions today, as the technology rapidly grows, are anywhere from ten minutes at best to a few hours or days at worst. This is one of the main reasons for the fork in the protocol back in 2017 and even many newer technologies promising to scale the protocol better for quicker transactions; products such as lightening. The author also said that Bitcoin has no transaction fees like one has with a credit card, yet this also incorrect. With the rise in popularity, there are now tiered fees based on how quickly one would like a transaction to be fulfilled. There is no guarantee, but if you want it to happen quicker, you may be required to pay upwards of 10% in fees. This again does not scale or mirror what the author claims. These are only a few of the things that stood out while listening to the book.

At the time the book was published, Bitcoin was on a rapid rise to the top. However, with its popularity, come other issues that have shown its inability to truly scale and replace traditional currencies. Due to the rapid fluctuations in the price of a Bitcoin, many vendors who accepted them in the past have begun to turn their backs on Bitcoin. We have also seen a recent decline in the value of a single Bitcoin coin from its high of $20,000 USD to $7,500 USD in a few days; a nearly 62% decline. There has also been a focus on banning the purchase of all cryptocurrencies in various countries, and many companies in the space like Visa, Mastercard, and PayPal, have said they would not permit the purchase of said cryptocurrencies via their solutions. At times, I felt the author seemed to contradict himself when he talked about the security of the technology, but also said how insecure it can be if one is not careful only a few pages later (relating to storage, but it was not clearly stated).

In relation to the book's narration, I felt that Jimmy Kieffer did a decent job. It is very hard to judge because the book was so short. I do not recall any audio artifacts such as page turns, swallows, etc. while listening. His voice was clear and the pace the book was read was well done.

In summary, I cannot recommend this book to a person who is beginning the journey with Bitcoin nor anyone else as the details it presents are rapidly changing and a book like this is often outdated when it is published. There are some great primers around the technology and how to get stared with Bitcoin if you search on the Internet. One of the best ways to learn and get stared is to find someone who is already involved. Have them walk you through the process, while also informing you of the pluses and minuses of these commodities. To me, this book felt more like a FAQ document that was taken off then Internet and arranged in an outline form and made into a very short book.

Disclaimer: I was voluntarily provided this review copy audiobook at no charge by the author, publisher and/or narrator.

The information provides a nice overview for beginners, as the title states. Not too technical and easy to understand.

The narration is acceptable, although there is some echo and popping of the letter "P".

This book was a great quick overview of what bitcoin is, why it's important, and what you need to know about it.

The thing that made this book the most useful, in my opinion, is the lists and examples that are included. For example a list of Bitcoin exchanges is given along with a security rating for each of them. There is also a list of concerns/things you should know about bitcoin where a lot of common misconceptions are put to rest.

If you don't know anything about bitcoin and would like to understand what all of the hype is about then I'd recommend this book, it would be worth the time. Just remember that, like the title says, this book is geared toward beginners.

Full disclosure: I was given a free copy of this book in exchange for an honest review.