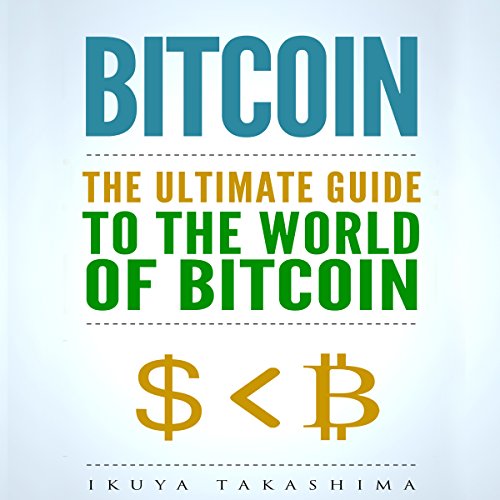 Bitcoin: The Ultimate Guide to the World of Bitcoin

By: Ikuya Takashima
Narrated by: Michael Lee Martin
Try for $0.00

The world has always run on traditional fiat currencies, which have been backed and controlled by governments. The government can inflate or deflate the price of these currencies without any democratic involvement. This also meant a high degree of regulation and government scrutiny that led to manipulation, but then came Bitcoin.

Bitcoin is a decentralized virtual currency that is not controlled by anyone and that does not require a third-party intervention. It was created by a figure known as Satoshi Nakamoto in 2008. His identity is still unknown, and he vanished from the Online world a few years after introducing the world to the revolutionary technology of Bitcoin. Bitcoins value has increased over the years because of its popularity, and many people have made a lot of money from it.

No central figure controls Bitcoin, but it's regulated by a peer-to-peer network that provides it with a functional base without the need of an external figure. Bitcoin is a democratic currency because it cannot be influenced or manipulated by a few wealthy people for their gains and interests. Most people have heard about Bitcoin and cryptocurrencies, but there is a lot of mystery that surrounds this terminology. Therefore, most people are hesitant about investing in this lucrative currency.

Bitcoin has almost become a buzzword in the last few years, thanks to its growing popularity. But the important question is, how does Bitcoin function? Is it a sound investment opportunity? How can you buy Bitcoin? If you want the answer to these questions, then this is the audiobook that you need. Bitcoin is changing the world, and it is entirely possible that in the next 20 years, it might become the currency that everyone in the world uses. Some governments, like that of Japan and Switzerland, are openly embracing it.

Download your copy now and join the Bitcoin revolution!

What listeners say about Bitcoin: The Ultimate Guide to the World of Bitcoin

I had no idea about bitcoin and this being the first book to gain knowledge I have learned SO much !!! Very easy to understand and put together perfectly

This is an excellent resource. . This was clear, concise and applicable information that got me to a very good place already

For anyone wanting to understand the subject of cryptocurrency and use for investing then get this book.I definitely recommend it for anyone

This book has everything you need to know about th

This book has everything you need to know about this latest digital technology and be able to understand it all. I am proud to recommend this book to beginners like me for them to be more aware.

This is a great learning book on cryptocurrency. A great informative book. Providing learning content

This is an amazing book. It helps me understand all aspects bitcoin and its uses.

Broad explanation of what money is

I found this book fascinating. Most of the book carefully explains what makes money valuable and the historical pitfalls of various media used in the past. In hindsight the approach taken by the author has left me feeling confident that I understand what money really is and its pitfalls. I feel more secure in my approach to digital currency , what it is and what is in not. I recommend the book to every school child as basic reading! Of course the IMF wont let that happen. The technicalities of Bitcoin are covered in simple terms so if you want in depth knowledge specific to Bitcoin then you need to find it elsewhere, a hardcopy book would be a better medium for that. Certainly listen to this book before jumping into technicalities as the real issues are around trust, money hardness and the massive fight brewing against fiat currency.

This is the most comprehensive and complete case for Bitcoin as the best option for sound money and store of value. To protect purchasing power in the future, exchange fiat currency for Bitcoin. This book thoroughly explains why.