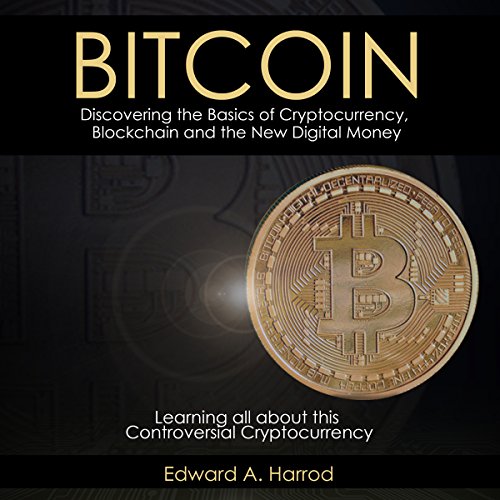 Bitcoin: Discovering the Basics of Cryptocurrency

What will be it's value a year from now? Would you let yourself be left behind?

We are experiencing the biggest change in the way we use money. Digital currencies aren’t new, but with the discovery of Bitcoin, it feels like there is a whole new world just waiting to be discovered.

People who started investing early got a big piece of the pie. But don’t let that stop you!

It is intimidating at first, especially when you hear terms that you haven't heard before: asics, armory, block, ryzen, scrypt, radeon, eos, nano...

Aren't those alien words? That was my first impression, too. And I have to be honest, the new terms do not stop multiplying. No worries though, I've got you.

In this audiobook, we'll cover:

What listeners say about Bitcoin: Discovering the Basics of Cryptocurrency

An outstanding introduction to the technology behind Bitcoin and cryptocurrency. Great narration, engaging, and well explained.

A simple and logical explanation!

I highly recommend the book to anybody entering the world of blockchain. The author provides a simple and logical explanation that is not easy to find elsewhere.

I enjoyed this book!

I enjoyed this and so I felt I should leave a review to help others. I liked the tone of the narrator and I could grasp the information well.

How does Bitcoin solves it.

I like the structure of the book where every chapter lays out a metaphor for the problem, what are we solving, what is the challenge, and how does Bitcoin solves it.

I liked the tone of the narrator!

I enjoyed this and so I felt I should leave a review to help others. I liked the tone of the narrator and I could grasp the information well.

I love the straightforward practical approach.

A variety of topics are covered, such as mining, buying, selling, and security, etc. I love the straightforward practical approach.

This audiobook is great.

For anyone who wants to start investing in bitcoin or just wants to learn more about it, this audiobook is great.

A better understanding of bitcoin.

I first heard about bitcoin a while ago and was interested in investing in it. This book is the perfect way to gain a better understanding of bitcoin.

The author does a great job making bitcoin easy to understand and gives us step-by-step instructions to make it easy. Highly recommended.

This book is the perfect way!

I first heard about bitcoin a while ago and was interested in investing in it. This book is the perfect way to gain a better understanding of bitcoin.

This audiobook helped me understand.

This audiobook helped me understand how will I earn from Bitcoin. It taught me the controversial cryptocurrency, Bitcoin which is awesome and really promising.

I am at the beginning of learning about Bitcoin.

I am at the beginning of learning about Bitcoin. I think this book gives general information that the person needs to know. It is easy to listen and understand, pretty comprehensive.

I recommend it to anyone.

For anyone wanting to understand the subject of cryptocurrency and use for investing then get this book. I recommend it to anyone.

Great book on the technology surrounding bitcoin technology. Recommend if you want to know more about Bitcoin.

This book is knowledgeable!

Necessary for everyone who wants to understand Bitcoin basics and other cryptocurrencies. This book is knowledgeable!

I enjoyed this book.

I enjoyed this book. It was my first audiobook about bitcoin and the cryptocurrencies, it is a well-researched book!

This book is a clear, accessible account of bitcoin's fundamental principles and the dynamics of its development.

Great audiobook on bitcoin and cryptocurrencies, very engaging and I learned so much about this breakout technology.

Very informative. I would encourage anyone that wants to get into cryptocurrencies to consider this audiobook to listen!