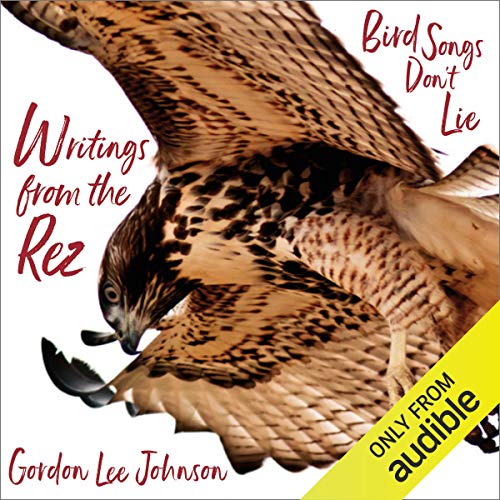 In this deeply moving collection of short stories and essays, Gordon Lee Johnson (Cupeño/Cahuilla) cements his voice not only as a wry commentator on American Indian reservation life but also as a master of fiction writing. In Johnson’s stories, all of which are set on the fictional San Ignacio reservation in Southern California, we meet unforgettable characters like Plato Pena, the Stanford-bound geek who reads Kahlil Gibran during intertribal softball games; hardboiled investigator Roddy Foo; and Etta, whose motto is “early to bed, early to rise, work like hell, and advertise”, as they face down circumstances by turns ordinary and devastating. From the noir-tinged mystery of “Unholy Wine” to the gripping intensity of “Tukwut”, Johnson effortlessly switches genre, perspective, and tense, vividly evoking people and places that are fictional but profoundly true to life.

The nonfiction featured in Bird Songs Don’t Lie is equally revelatory in its exploration of complex connections between past and present. Whether examining his own conflicted feelings toward the missions as a source of both cultural damage and identity or sharing advice for cooking for eight dozen cowboys and -girls, Johnson plumbs the comedy, catastrophe, and beauty of his life on the Pala Reservation to thunderous effect.