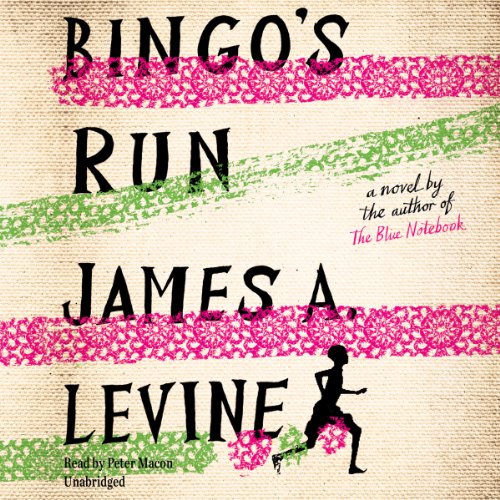 By: James A. Levine
Narrated by: Peter Macon

For fans of DaveEggers, Teju Cole, and James McBride comes this extraordinary novel of morality and the redemptive powers of art that offers a glimpse into an African underworld rarely described in fiction.

Meet Bingo, the greatest drug runner in the slums of Kibera, Nairobi, and maybe the world. A teenage grifter, often mistaken for a younger boy, he faithfully serves Wolf, the drug lord of Kibera. Bingo spends his days throwing rocks at Krazi Hari, the prophet of Kibera's garbage mound; "lipping" safari tourists of their cash; and hanging out with his best friend, Slo-George, a taciturn fellow whose girth is a mystery to Bingo in a place where there is never enough food. Bingo earns his keep by running "white" to a host of clients, including Thomas Hunsa, a reclusive artist whose paintings, rooted in African tradition, move him. But when Bingo witnesses a drug-related murder and Wolf sends him to an orphanage for "protection," Bingo's life changes, and he learns that life itself is the "run."

A modern trickster tale that draws on African folklore, Bingo'sRun is a wildly original, often very funny, and always moving story of a boy alone in a corrupt and dangerous world who must depend on his wits and inner resources to survive.

Sometimes a book is so great that I don't feel worthy to review it. I don't have the words to describe how amazing this story is, but to make sure as many people as possible enjoy it, I'll try.

The story is perfectly paced and is a human, emotional story that also keeps you on the edge of your seat.

Often it's the characters around the main character that actual make a story great. In this case, it's how Bingo relates to each one that makes the story so rich. His descriptions and perceptions of people around him give an insight that cuts straight to their soul. You get an intimate view of the other characters while being barely introduced. It's very powerful.

The last quarter of the book was exhausting. I held my breath, and didn't want it to end, and then really wanted to know how it ended, and dreaded the ending, and cheered, and laughed out loud. I sat holding perfectly still and cherished every word of the last chapter. Seriously, it's that good, it's that special.

I loved the narrator after he spoke 2 words. Macon is perfect. His accent is enchanting, and I especially loved his voice for the priest.

Stop what you are doing and buy this book.

Bingo is the best runner!

I used a credit because I am going back to Kenya and thought this would be a good and fun read prior to my trip. It is a fun read but is sobering. Bingo is a character that stays with you and breaks your heart. The story is fast paced and the descriptions makes Kibera come alive - you can see the trash heap and smell the stench. Levine develops characters through Bingo's eyes and it really works well. Peter Macon is the perfect voice for Bingo. It is a great listen and credit worthy. Jumbo!