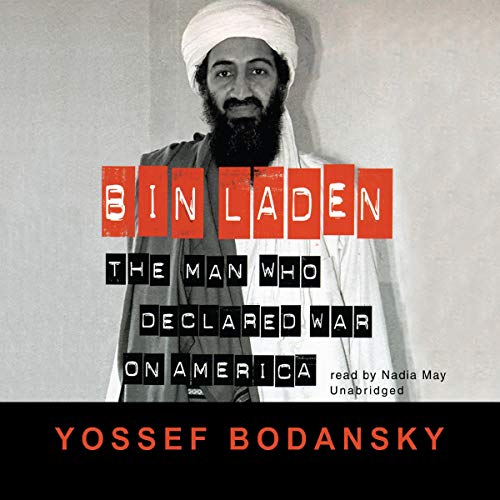 The Man Who Declared War on America
By: Yossef Bodansky
Narrated by: Nadia May
Length: 21 hrs and 33 mins
Categories: Bios & Memoirs, Criminals
3.5 out of 5 stars 3.4 (16 ratings)

By: Yossef Bodansky
Narrated by: Nadia May

Who is Osama bin Laden, the only terrorist leader ever to have declared a holy war? What drives him and those he leads to hate a West that helped enrich and arm them? Bin Laden's name has been linked to a number of incidents that have cost Americans their lives, including the bombing of the USS Cole in 2000 and the destruction of the American embassies in Kenya and Tanzania in 1998. Now, he is linked to the catastrophic assaults on the World Trade Center and the Pentagon.

Here is a comprehensive account of the rise of bin Laden. In meticulous detail, world-renowned terrorism expert Yossef Bodansky uncovers the events in bin Laden's life that turned the once-promising engineering student into a cold-blooded leader of radical Islam. In the process, Bodansky reveals a chilling story that is as current as today's headlines but as ancient as the Crusades, a story that transcends bin Laden and any other single man. This book is a sobering wake-up call.

Wasn't what I expected

I was looking for a biography of Bin Laden. This is not one. It's more of a history of militant Islamism over the last 20 years or so. Bin Laden is hardly even a central figure, and it doesn't go at all into his personality, family life, or anything you'd expect from a biography. Very detailed, and informative, but the title is misleading.

Also I didn't like the reader very much. I don't know if she just read too fast or what, but I had trouble keeping up.

I simply don't trust it

I gave up on this one halfway through when I realized that I simply couldn't believe most of it. Brodansky gets credit for recognizing the importance of bin Laden before 2001, sure, and he's working through a time when there was much less interest, less known, and less written on any of the matter. But he puts Iran behind EVERYTHING, and the entire concept of Shi'a/Sunni divides is almost completely glossed over. There's almost no memtion of Wahhabism or Salafism, a little mention of Qutbism, no mention of the relation between the two. Al-Qaeda is only briefly mentioned near the end (searched through Kindle e-reader) as a charity organization and distinctly not a terrorist network. The details are over-the-top for these blow-by-blow of countless hundreds of summits and consortia, but the actual context of things like the Beruit barracks bombing or the 1993 WTC attack are barely touched in passing (even if these were not OBL's direct work, they were most definitely formative in his mindset against the US). Khalid Sheikh Mohammad gets no mention, which even if it was simply the state of intelligence at the time is testament to the book's dated quality.

A lot of people mention the sources not being named, and to Brodansky's credit he acknowledges this up front and I respect that. Unfortunately, I think a lot of shadow references give what they think the payer wants to hear, and in this case that's a pan-Islamic campaign run wholly out of Tehran. The intra-faith violence between various Muslim factions since 2001 makes this incredibly implausible, to say the least.

Save your time and money for a more current and trustworthy source.

On the plus side, Nadia May is great as always.