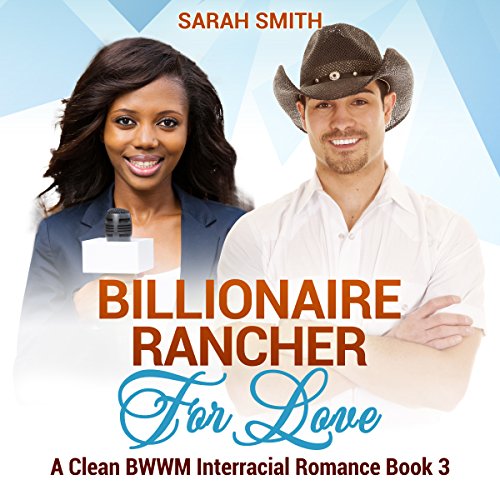 By: Sarah Smith
Narrated by: Ayelet Sror
Try for $0.00

Brock Maclancy owns a cattle ranch in Texas. His family has owned and run cattle since the 1800s, when they immigrated to the US from Ireland. Media shy, he's worth billions now thanks to his savvy investments skills. With red hair and big shoulders, and a little over six feet, Brock is Texas' most eligible bachelor.

Mia Mellis is a reporter from a small magazine in Dallas. She is second generation in the US. With black hair, olive skin, and dark eyes, she looks very exotic. Mia travels to Brock's ranch to interview him; her boss wants her to find dirt on him.

Immediately they don't like each other. He finds her abrasive and annoying. She thinks he's hiding a private life so he looks like some kind of saint. Will they find love in the ranch?

What listeners say about Billionaire Rancher for Love

NOT a BWWM story!!" but, an Ok clean love story!

The lead female was " olive skinned of greek descendant " NOT a black woman. If they just had said "brown skinned" and left the rest open to our imagination . That would be Fine. But, the story was "cute" AND clean.. OK story. for a 2 hours story safe to listen without earbuds.. ehh extremely cute story.