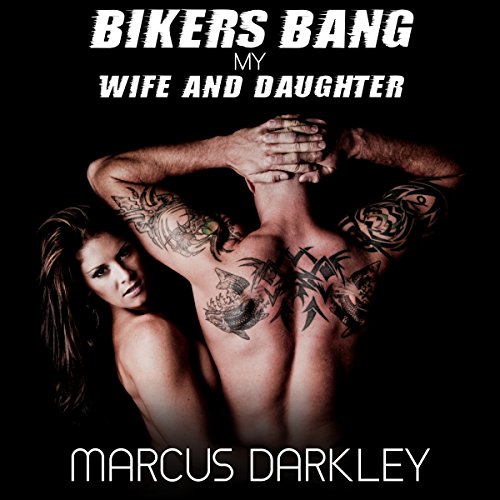 By: Marcus Darkley
Narrated by: Bruno Belmar
Try for $0.00

His supposedly innocent daughter is with a biker when he gets home but it seems his wife is also not as respectable as he thought!

The big Harley in his drive should have set off alarm bells in his head. The rough looking biker that was buried deep inside his student daughter certainly did! Then his prim and proper wife reveals herself as a biker slut and his whole reality is turned on its head!

The moment I stepped through the front door, I knew that something was wrong. There was a leather jacket in the middle of the floor and a strange feeling in the air. Then I heard it. "Uuh!" A long, drawn out female moan. It was hard to recognize her voice but I instinctively knew exactly who it was; our 19-year-old daughter, Jodie.

I marched into the lounge, ready to do battle and stopped dead at the horniest sight: naked to her waist, her top completely missing and a bearded, tattooed giant of a man was slamming into her from behind. I paused out of a sense of self-preservation. I was an 11 stone accountant and this monster looked like he could break me in half with one hand. All the same, I was an Englishman in my castle and he was definitely taking liberties with my family. I puffed out my chest and yelled in a disappointingly squeaky voice. "Get the hell away from my daughter young man!"

Even as I said it, I realized he wasn't that young. He was probably 10 years my junior but at least that much older than Jodie. And my outburst seemed to have absolutely no impact on him. He just laughed and pointed at an upright chair. "Sit there, pencil neck. I don't want to hurt you!" I gulped and turned to my wife for support but she seemed completely transfixed. Then he pulled out of my daughter and she expressed her disappointment with a little groan. He slapped her possessively on the behind and crossed the floor between us in a few long strides.

What listeners say about Bikers Bang My Wife & Daughter