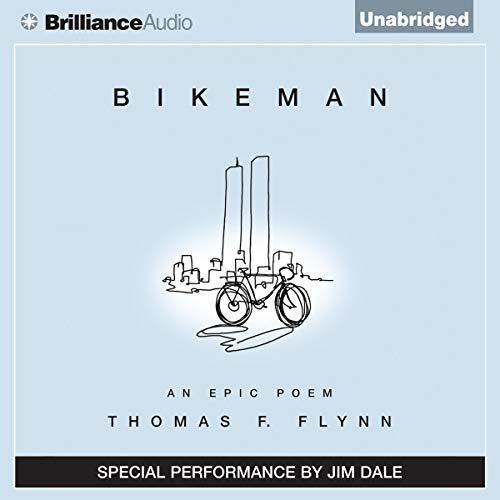 "I live to talk about it, to relate the tale as it happens, not only its extremities and cruelty, but also the goodness that flourishes too."

Seasoned journalist Tom Flynn shares his experiences on that "forever September morning" from his perspective as a journalist and neutral observer who stands apart from the event, but also as a participant, a survivor, and now a defining chronicler of the morning that changed our nation forever: September 11, 2001.

It began with a bicycle ride to the World Trade Center to cover the first tower's attack and continued as the tower fell and Flynn found himself both bearing witness to, and participating in, the very event his well-trained journalistic senses intended to record and report.

From those whose deaths revealed the most private moments of their lives, to those who helped guide the way to safety (like the medic Avi who called him Bikeman), Flynn writes of the fellowship he felt toward others who shared his experience.

In Bikeman, you will experience the battle against the blackness of a "boiling brimstone avalanche" of chaos, silence, life, death, heat, ash, and the rising and falling of the gray-colored unknown.

"We did not live through it, we just did not die," Flynn writes. What sets his story apart from other 9/11 accounts is his visceral interpretation of the event through a journalist's eye and a poet's pen. He has composed a historical ballad that is part quest, part memoir, part eulogy, and part survivor's lament, conveying the events of that morning in harrowing, unforgettable detail.

"Both heartbreaking and haunting, his words will stay with you like that 'forever September morning'." (Meredith Vieira, Today)

What listeners say about Bikeman

I purchased this story this morning to "honor" this day. I never expected to hear anything as wonderful as this. Mr. Flynn's way of expressing what he experienced on 11 September 2001 will stay in my mind and heart forever. Intermingled with the sadness and the unimaginable anguish of that day he was able to bring gentleness into so many places~the love for those that died~the thoughts they must have had...sentence after sentence...beautifully done.

Thank you so very much for sharing this priceless gift of your memory, Mr. Flynn. I will listen to this story every year on this day in honor of the people you wrote about and will never forget.

The narration by Mr. Jim Dale was absolutely perfect. No one could have ever expressed all the feelings, all the pain, all of it the way he did.

Both Thomas Flynn and Jim Dale have created a unique piece for history to hold dear.

I own both the hardback print version and this narration. When I visited the 9/11 Museum I requested a second copy of the hardback for a friend of mine whose brother died in the South Tower, but they weren’t selling it. The people had actually never heard of it at the time. I shared a bit of the narration with the clerk at the time (2016) and gave my copy of the hardback to my friend and bought another later. I’m hopeful this book now is located in the museum. It deserves to be.

Jim Dale is the master of all narrators. I watched a program which featured him reading this and I saw how he did his entire reading in a single sitting. I believe he said that the people who were there didn’t rest, so he didn’t want to rest. He is, himself, in a sense another “survivor,” as is everyone who was in New York City that morning, says the poem. If you are soothed by Jim Dale’s voice and wish to hear the words written by an actual “literary first responder” please download this. You won’t regret it.

I listened to it at ground zero on 9/11/2016, but stayed a respectful distance. Families only were allowed on site at the moments themselves. I cried and cried and...

If you can get past the over the top language.....

I really wanted to like this book. I purchased it in early 2010. I tried to listen to it back then and the over the top, flowery language was just too much. I couldn't even concentrate on the story.
In April 2011 I decided that it deserved another try.
Unfortunately, the result was the same. This book just didn't work for me.