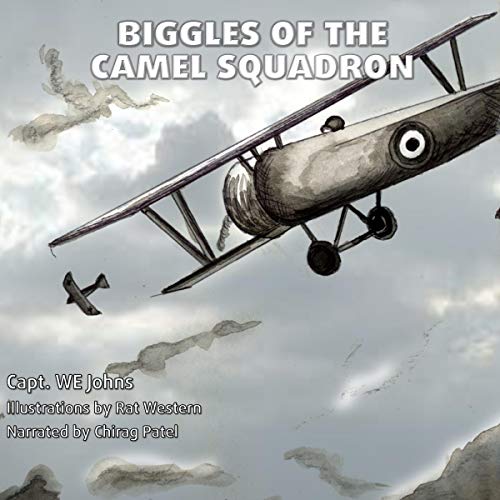 Biggles of the Camel Squadron

Join the intrepid Captain Biggles, hero of the Royal Flying Corps, as he fights on the front line of World War I. The stories in this volume covers ambushes, disaster, mysteries and more than a few ridiculous stunts, all based on real-life events in the life of WE Johns. Fun for adventurers of all ages.

This book was the first mainstream outing for a classic British hero. Wry, brave, and with more than a little taste of absurdity and heroism, come join Biggles, Algy, and the Professor in a bygone era, when being British meant that even one’s enemies were to be treated with honor and nobility.

In this volume, Biggles, Algy, and the other pilots are at the front lines, toward the end of the war. Come along as they fly dangerous missions against zeppelins, airbases and fortified positions, hunt a dragon, get shot down and escape captivity, and more.

What listeners say about Biggles of the Camel Squadron

This story is based on the real story Biggles, a pilot during WWI. My 14-year-old son listened to this one with me and he thought it was a lot of fun and each chapter was a different story. Stories like an adventure taking down zeppelins. The narrator has a nice accent and overall tone but he was a bit slow, so I would recommend changing the narration speed to 1.25x. A great history read for kids.

From a different time.

Biggles of the Camel Squadron. ..
A very easy listen, Biggles books were young boys classics. Unfortunately time has not been kind to these stories. Time and style have moved on and these now feel shallow and dated, my grandchildren who listened to them with me weren't impressed or intrigued.
I didn't find them the rip-roaring tales of my childhood (over 50 years ago ).
However I am pleased to have listened to the audiobook and am very happy that it is preserved for the future.
Recommend it ?? If this is your genre then yes.
I received a free copy of this audio book at my own request and voluntarily leave this honest review.

Great story from my youth

I enjoyed this wonderful childhood story, but the narrator wasnt very keen on his job I realised.

Great story but not the best narration

The story is of course, great. However the reader is VERY slow and stilted in his narration. However, if you listen to the story at about 1.5x the normal speed it isn't too bad

Absolutely awful narration. I love Biggles stories, but the chap reading this is not a natural narrator by any stretch of the imagination. Had to give up as couldn't enjoy any part of the listen.

The pace and the monotone used by the reader does the stories no justice. He makes the book dull and slow which the text does not match. Please dont use him again audible! I've listened to well over 300 books on here and this is only the second bad review I have ever had to leave for a narrator.

Destroyed by the narration

I love these books, I grew up with them.

While I never really got much out of the non-WW1 books about Biggles.
By the authors own comment they tended to be for adolescent readers rather than the far older tone of the WW1 books.

I really love these books, so I was so pleased to find them starting to appear.

But the stereotype tone of the voicing the narrator puts on the characters is completely at odds with the behaviour and attitudes of the writers ‘voice’. Worse the the narration is just so grating - its a parody of 1900’s English rather than a stab at recreation.

I mean seriously we are talking about Dick Van Dyke Cockney level here - for the non-UK audience, its bad. Really really bad.

I haven’t managed to finish this recording, it just isn’t tolerable. Given how long its taken for to get anything for Biggles, its very disappointing.

Really enjoyed listening and imagining the scenes.
My only downer is the narrator, a little boring.

Oh dear, the narration is woeful, fortunately the work of Captain Johns makes up for it... just.

The book is as I remember and I enjoined it however the reading style is rather stilted and fails to flow in the same way as Biggles flies north dose.

Couldn't listen to it, I want a refund. After listening to Michael Palin narrate this, it was unbearable unfortunately to try and listen to this

the story was a good tail showing what life like o