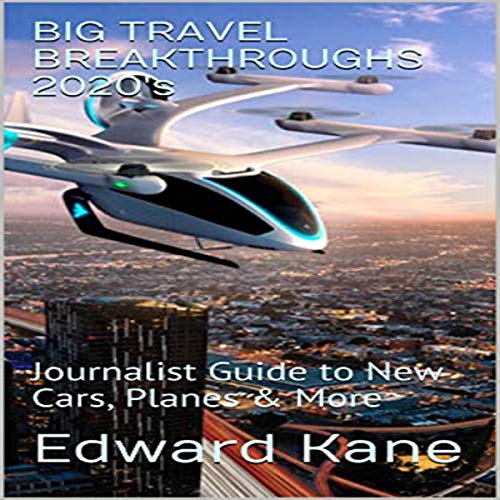 By: Edward Kane
Narrated by: Maryanne Kane
Try for $0.00

The 2020s are ushering in a wave of new travel vehicles. New cars, planes, trains, bikes, and more are being invented, and they are unlike any form of travel in the past. The vehicles are electric, green, autonomous, some solar and hydrogen-powered, and loaded with intelligent technologies. The vehicles and their breakthrough capabilities offer exciting new travel opportunities for all of us. Big Travel Breakthroughs 2020s delivers the top new vehicles, prototypes, and concept vehicles rolling out during this decade.

As a journalist, I’ve spotlighted the big travel breakthroughs and megatrends, for instance, the game-changing Rolls Royce and Virgin Galactic partnership to develop a next-generation supersonic jet (SST), capable of travelling from NYC to London in two hours. From the Netherlands, I’ve profiled the world’s first long-range solar-powered car that will be on the road in 2021. Also in my book are profiles on the best new eVTOL flying cars and flying taxis, including the Dutch-invented PAL-V, which is ready for takeoff. Megatrends explored in the book include the dramatic global rise in the use of electric bikes and electric trikes, and the rapidly expanding lineup of new electric cars. I’ve also detailed some very hot, exotic new travel vehicles, such as a solar luxury pod to sail the ocean, a combination motorcycle-jet ski, hyperloops, personal aerial mobility jet packs, and much more.

If you want to be in the know on the most exciting and fun travel vehicles for the 2020s, Big Travel Breakthroughs 2020s is the book for you.