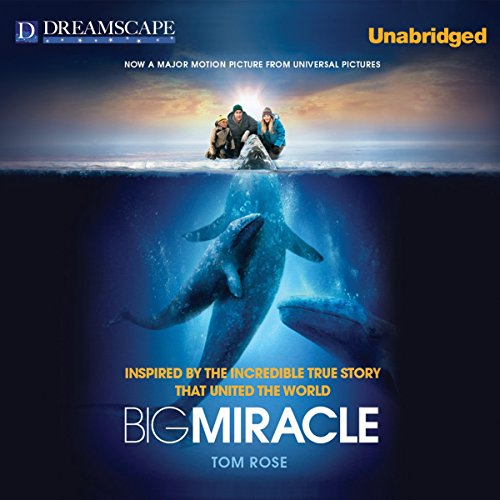 Set in Cold-War-era 1988, Big Miracle,/i> is the real story behind the remarkable, bizarre and often times uproarious event that mesmerized the world for weeks.

On October 7, an Inuit hunter found three California Gray Whales imprisoned in the Arctic ice. In the past, as was nature's way, trapped whales always died. Not this time. Rose compellingly describes how oil company executives, Greenpeace activists, Eskimos, businessmen, and military officers heroically worked together to save the whales. The book also features some of the more than 150 international journalists who brought the story to the world's attention. The rescue was followed by millions of people around the world and brought President Reagan and Mikhail Gorbachev, the General Secretary of the Soviet Union, to join forces.

"...compelling...the surprising tale of how three creatures sparked a global effort that united warring factions in sheer awe at the bulky yet graceful denizens of this stark and little-understood world." ( Publishers Weekly)

The author uses this as a soapbox for his personal and political agenda. He takes what could be a very heartwarming story and twists it into a rant on the evils of Greenpeace, while painting the natives as moneygrabbing indigents and the Oil corporations as altruistic saviors.
Much of the story is sidetracked by the author using sarcasm a weapon to vent his own version of everthing from National Politics to his opinions of individuals and policies.

This is great for those interested in inspirational environmental stories. I highly recommend this audio.