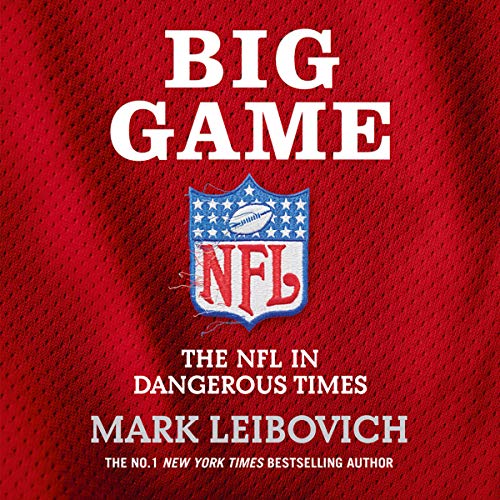 From the number-one best-selling author of This Town comes a thrillingly raw and hysterical account of the billionaires, crooks, charlatans and scoundrels that own and run the NFL.

American Football - with its celebrity players, billionaire owners, and cheerleaders with flawless teeth - is more American than apple pie. Which is why celebrated New York Times journalist Mark Leibovich has chosen football as the vehicle through which to examine the troubled state of Trump’s America.

Big Game chronicles a four-year odyssey that has taken Leibovich deeper inside the NFL than anyone has gone before. From the owners' meeting to the draft to the sidelines of crucial games, he takes in the show at the elbow of everyone from Tom Brady to big-name owners to the cordially despised NFL Commissioner, Roger Goodell.

Ultimately, this is a story of what may come to be seen as ‘peak football’ - the high point of the sport’s economic success and cultural dominance, but also the moment when the dark side began to show. It is an era of explosive revenue growth, as deluxe new stadiums spring up all over the country, but also one of creeping existential fear. Football was never thought to be easy on the body - players joke darkly that the NFL stands for ‘not for long’ for good reason - but as the true impact of concussions become inescapable background noise, it’s become increasingly difficult to enjoy the simple glory of football without the buzzkill of its obvious consequences.

And that was before Donald Trump. In 2016, the NFL slammed headlong into America's culture wars. Big Game is a journey through an epic storm. Through it all, Leibovich always keeps one eye on Tom Brady and his beloved Patriots, through to the 2018 Super Bowl. Pro football, this hilarious and enthralling book proves, may not be the sport America needs, but it is most definitely the sport it deserves.

What listeners say about Big Game

the book highlighted alot to me that I wasn't aware of. Good for NFL fans