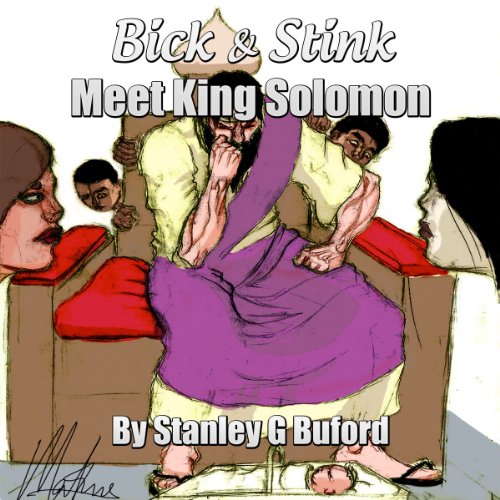 Two inquisitive children are told a captivating bedtime bible story. Their father, Gene reads a book: Tales of King Solomon. He tucks them in; says goodnight and that's when the real story begins.

Bick and his younger brother, Stink, are taken back in time; through the power of their dream! They both awaken on the beach in the land of Israel during the era of the great King Solomon; the wisest man that ever lived. Bewildered and confused, at first, they collect themselves and plan a method of survival.

The boys build themselves a shelter and pick fruit to sustain themselves overnight. The next day they are arrested by the king's guards, charged as criminals and taken to see his majesty, the Great King Solomon, to await their fate.

I would recommend that even the "casual" reader purchase and cherish this wonderful book.

What was one of the most memorable moments of Bick & Stink Meet King Solomon?

The story climbs to an unbelievable pitch when the king responds to the character Stink's observation that "all men are created equal!"

I was very impressed when dinner was prepared, at great expense, for the kids by the king only to realize the story was taking another interesting "twist" in order to captivate the reader.

I tried to listen to it in one sitting but found that breaking it up in small bits allowed me to enjoy this read in a more "thoughtful" way.

If you enjoy just one audiobook this year this should be it!