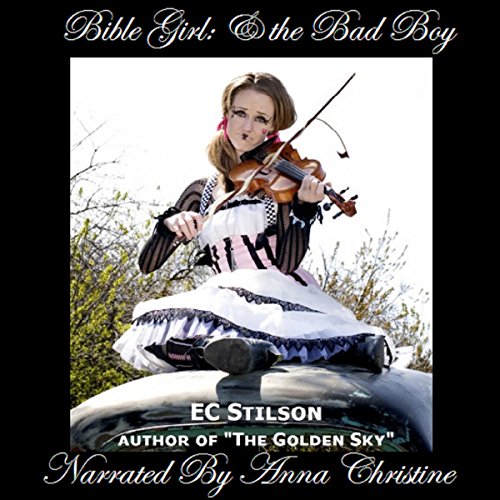 By: EC Stilson
Narrated by: Anna Christine
Try for $0.00

Faced by an uncertain future and surrounded by hypocrites, Elisa feels her foundation crumbling. She doesn't know who to turn to. That's when she meets a mysterious man. But maybe she shouldn't trust him after all. Will he help her, or make things even worse than they were before? Find out.

What listeners say about Bible Girl & the Bad Boy

An entertaining YA tale based on a true story

The narrator does a good job with this book. She spoke clearly, does ok with other vices and there were no issues with mistakes or volume levels. I thought the characters were well done and I found myself liking Elisa early on. She is an interesting person, strong willed and actually has a lot funny moments. She has a lot of stuff happen to her that test her emotionally but usually she makes the right decisions and has people around to help her.

Some of the stuff that happens seems hard to believe but as it is based on true events that did happen. I liked all the geeky references to things like Harry Potter and Lord of the Rings. I also listen to two podcasts with people who live in Utah, so I appreciated the setting as well. I have to say the exorcism scene was pretty wild, especially considering it was real, just a bizarre thing, I'm always amazed with the crazy stuff people believe. Don't get me wrong, I don't have anything against religion, I'm not religious but I understand it gives people hope, direction and comfort, I just think a lot of people let it consume their life and place far too much significance on it.

My biggest issue with this book was I'm just not the right audience for it. I never had any kind of crisis of faith or with my identity in high school, I had lots of friends, never had a girlfriend or was ever tempted by drugs or alcohol (yes I was and still am a geek, just a much happier one). This book is much more meant for teenagers as it has some important lessons about love, drugs, friendship and school. That said, however, I found she described everything well and there were plenty of twists and turns, enough to make me curious for what would happen next most of the time.

I appreciated the shortness of this book, I often feel many novels are drawn out. As I said I think this would be book enjoyed a lot more by teenage to early 20's woman rather than a forty-something man. For me I did still enjoy it, I just found parts of it so far removed from my own life (and if it wasn't a true story hard to believe) that there were times I lost interest. As before I listen to this on 1.25 speed and it takes nothing away from it. I do really like the way Elisia changes at the end, she becomes a much stronger person. I also really admired the maturity, compassion and understanding she shows for transgender people, the homeless and generally always sees beyond a person's exterior. She was in several ways very mature for her age. I would recommend it, just not to a middle-aged man. I'll also say that I really liked the ending and was pleasantly surprised.

A roller coaster ride through teen age love! Kept me on the edge of my seat. Narrator's emotion helped to keep the story believable. Be sure to listen to the end!