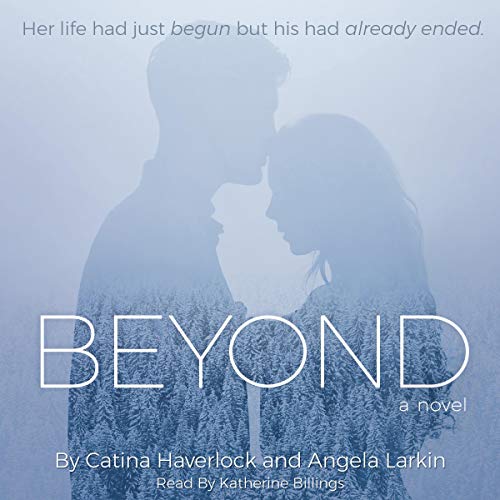 By: Catina Haverlock,Angela Larkin
Narrated by: Katherine Billings
Try for $0.00

"Dangerous. Wrong. She could be so close to finding out who I really am, and I don't want to think about how badly that could damage her. If I have any conscience, I'll turn and run. But I can't let her go."

Presley Hale has no idea the guy she just told off in the school parking lot died in a drowning accident four months ago. Why would she? It's not like she knows she can see the dead.

Stunned by Presley's sixth sense, Landon Blackwood rethinks his planned departure and begins tracking her to find answers to their mysterious connection. When their complicated relationship turns dangerous, they learn that tampering with the boundaries of death comes with consequences. Can Landon save Presley from the insidious spirits who have marked her for death, or was their love doomed from the beginning?

What listeners say about Beyond

Well what am I suppose to do know that I’ve finished Beyond by Catina Haverlock and Angela Larkin, Co-authors! This is such a well written unique story I don’t even know how to review it as I feel ripped open and bare. All I can say is bring on Book 2, Before!!! I can’t say enough about Katherine Billing (artist) narration! She was brilliant bringing this story to life. Each character is unique and their emotions are so real!

It made me worthless until I finished it.

Usually I only read whenever I’m going to bed. This was one of the very first times I used an audible book. So I decided to restrict myself to only listening while I drove. The story was so good and the characters were so believable that I found myself coming up with ridiculous reasons to drive places just so I could listen. The Narrator was so good that she added a lot of life to the already well written characters. I loved how I could feel the emotion.

This was such a sweet, exciting love story. I didn’t expect the ending which I loved! What a great read..or listen!

I loved this book when I read it and loved it again as I listened to the audio version. The narrator is great.

If you loved twilight, this book will be right up your alley.

Couldn’t put it down!

I listened to the audible version, and I couldn’t put it down! The story hooks you in from the very beginning, and you don’t want it to end. The setting is so vividly described, and you feel that you can see everything happening. I loved the characters right from the start, and I loved that they are such good people. You totally identify with their thoughts and feelings. I almost had a problem because in the love triangle I loved both the characters! I also loved the very realistic and sweet depiction of life with an autistic family member. And the ending!! I listened to it 3 times! I thought it was going to end differently, and I was totally prepared for a bitter sweet ending. But, it had me on the edge of my seat until the very end.

I definitely recommend this book to anyone who loves a good romance some adventure too. I can’t wait to read book 2! I hope they release an audible version of it as well!

I would classify this as a YA book, but I’m in my 40s and really enjoyed it. It’s refreshing to have a clean book.
I thought I had it all figured out, but a twist I didn’t expect really caught my interest. This is a fun read that makes you think about life after death. You will enjoy this book!

I loved the book. Presley and Landon are so good for each other. I was sad and happy for them all at the same time. The narrator did a fantastic job. I can't wait to read the next book!

I devoured this book and the next one in the series! The story was unique to anything I’ve read before while still giving me all of the things I want in a fantasy romance - true love, larger than life obstacles, and even a confusing love triangle. Most of the characters were heroes with big hearts and honorable character. I loved to be inspired by them. Oh and get ready - The love story gets even better in book 2!!

This is a spellbinding story of paranormal proportions! A poignant story of love and loss that kept me in it’s grip from start to finish. I couldn’t put it down and now I can’t wait to read the sequel: Before.

Characters you'll fall in love with

It's been soooo long since I've read/listened to a YA paranormal. Immediately I remembered what had annoyed me about the last one...because this one was different. Presley - a daughter to a single mother with one brother, Chase, who has autism - is a strong, uplifting, bright light in this book. Her relationship with Chase is heartwarming, and her inner confidence is a strong departure from other YA female protagonists.

This story is a page-turner and I enjoyed every second of it! Perfect clean read for teens and adults alike!

Good clean teen romance. I loved the character development and storyline. Recommending this book to my teen daughters.