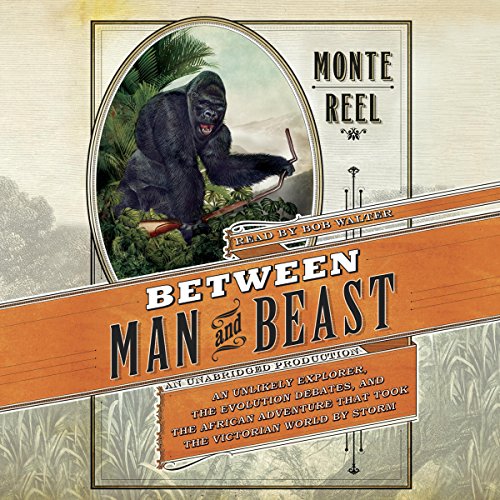 Between Man and Beast

The unbelievably riveting adventure of an unlikely young explorer who emerged from the jungles of Africa with evidence of a mysterious, still mythical beast - the gorilla - only to stumble straight into the center of the biggest debate of the day: Darwin's theory of evolution

In 1856 Paul Du Chaillu marched into the equatorial wilderness of West Africa determined to bag an animal that, according to legend, was nothing short of a monster. When he emerged three years later, the summation of his efforts only hinted at what he'd experienced in one of the most dangerous regions on earth. Armed with an astonishing collection of zoological specimens, Du Chaillu leapt from the physical challenges of the jungle straight into the center of the biggest issues of the time - the evolution debate, racial discourse, the growth of Christian fundamentalism - and helped push each to unprecedented intensities. He experienced instant celebrity, but with that fame came whispers - about his past, his credibility, and his very identity - which would haunt the young man. Grand in scope, immediate in detail, and propulsively listenable, Between Man and Beast brilliantly combines Du Chaillu's personal journey with the epic tale of a world hovering on the sharp edge of transformation.

"Reel provides a robust intellectual history by embedding Du Chaillu's story within the debate over evolution, the relationship among the human races, the rise of Christian fundamentalism, and the nasty backbiting that was common in the scientific arena of the time. He expertly probes the history of the enigmatic Du Chaillu, someone who purposefully shrouded his past from scrutiny....In Reel’s hands, Du Chaillu’s adventures in Africa, including his discovery of Pygmies and his part in a smallpox epidemic, were no less harrowing than his interactions with many of the world’s leading scientists and explorers.” ( Publishers Weekly)
"Adventure, history, nature, big ideas - what more could you want?" ( Library Journal)
"Fascinating....A lively footnote to the debate between science and religion and the exploration of the African jungle in the Victorian era." ( Kirkus Reviews)

What listeners say about Between Man and Beast

Granted, there are a few times at which this story seems to drag a little. But overall, it's one hell of a story. Darwin, Christians, and the Royal Geographical Society all battle it out to determine who is worth listening to and what is worth believing. Are we descended from apes?? Impossible, man! Amid the hoopla, Paul Du Chaillu doesn't stand much of a chance. He's a sitting duck for groomed academics who can spot a man who hasn't studied the proper prerequisites a mile off. But his lack of pedigree and education make him the perfect "everyman" to stumble into this hotbed of intellectual, social, and spiritual chaos. If this sounds like a novel -- you're right. It "reads" like a novel, but it's non-fiction. Great stuff. Although I am a female, middle-aged listener, I had a great time listening and recommended this book to my spouse who also loved it. The Reader is excellent; the story is unbelievable, true, and relevant even today.

High Adventure in Africa - The Search for Gorillas

It all starts in the mid 19th century. Paul De Chaillu is a young man trying to make something of himself, and decides that the way to do it is to be the first white man to see, kill, and bring back a gorilla. This may not sound like much in 2013, but back then it was a very big deal.

In the 1800s gorillas were completely shrouded in mystery. They had never been glimpsed by anyone other than the native tribes living in inner-Africa, who feared them greatly and viewed them as borderline supernatural beings. The natives told many gorilla-based legends. For example, it was thought that consuming the brain of a gorilla would give anyone incredible hunting and lovemaking abilities. In that case, who wouldn't want to chow down on some gorilla brain?

This book is largely divided into three sections. I'll do my best to give you an idea of how this book is structured without giving too much away about the plot.

In the first section, Paul heads into West Africa in search of gorillas, and is actually very successful. If you're a gorilla and you see Paul heading your way, then you should watch out because he shows no fear and is deadly. Things go well for Paul and he returns to America with many dead gorillas.

In the middle section, Paul returns and presents his findings to the scientific community. This is a time when Darwin had just introduced his evolution theory to the world, and people felt very strongly about it on both sides of the 'argument' (as they still do today). The evidence Paul brought back did not sit very well with certain people, and his reputation was attacked viciously. He was called a liar and accused of never having actually traveled to inner-Africa.

In the book's final section, Paul arms himself with increased scientific training/equipment and returns to Africa in order to redeem his broken reputation.

All three sections are interesting, well-written/narrated, and seemingly well-researched. I do feel that the middle section drags at times and probably could have been tightened up a bit. The material is compelling, but it just doesn't reach the same excitement levels as Paul journeying through Africa. All in all though, this book is excellent. It's a true tale of adventure and science, gorilla and man. Any fans of this genre should love Between Beast and Man.

Brings you from Victorian England to the jungles of the Africa in search of Europe's first glimpse at the gorilla. An absolutely true story of an adventure that demonstrates the biting world of science in the Victorian era. Sound boring? Not even a little: included in this adventure are Queen Victoria, Charles Darwin, Charles Dickens, the wild uncharted land of the Africa, wildlife never seen before, many native African tribes and even a large group of "cannibals".

I loved this story, and it inspired me to read Darwin's work again and other writings of the time. It seems that being a great scientist in Victorian times could make you as famous as being a Hollywood actor during the golden age of film. Unfortunately it was just as cut throat and competitive and FULL OF CONTROVERSY.

The story of the young French Explorer, Paul Du Chaillou and all he accomplished is truly extraordinary.

If you believe in creationism vs evolution, this might not be the book for you. Though it does deal with the struggle for many that age, including prominent scientists, to find god in the many archeological and biological findings of the time that completely contradicts the biblical belief of creation.

What would have made Between Man and Beast better?

Less time spent focusing on random anecdotes about scientists and intellectuals from the time period.

Has Between Man and Beast turned you off from other books in this genre?

The first couple chapters were interesting but it really falls off and becomes confused after the opening narrative goes away.

Ended up returning this. After the opening chapters it just kind of trails off into anecdotes about various scientists and scientific societies of the age. Many chapters are spent describing the chief naturalist at the British museum and various debates involving him and are SO BORING after the beginning African jungle adventures.