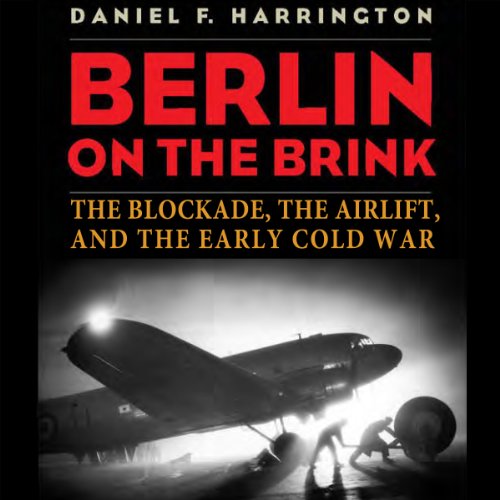 Berlin on the Brink

By: Daniel F. Harrington
Narrated by: John Sipple
Try for $0.00

The Berlin blockade brought former allies to the brink of war. Britain, France, the United States and the Soviet Union defeated and began their occupation of Germany in 1945. Within a few years, the Soviets and their Western partners were jockeying for control of their former foe.

Attempting to thwart the Allied powers' plans to create a unified West German government, the Soviets blocked rail and road access to the western sectors of Berlin in June 1948. With no other means of delivering food and supplies to the German people under their protection, the Allies organized the Berlin airlift.

In Berlin on the Brink: The Blockade, the Airlift, and the Cold War, Daniel F. Harrington examines the "Berlin question" from its origin in wartime plans for the occupation of Germany through the Paris Council of Foreign Ministers meeting in 1949. Harrington draws on previously untapped archival sources to challenge standard accounts of the postwar division of Germany, the origins of the blockade, the original purpose of the airlift, and the leadership of President Harry S. Truman.

While thoroughly examining four-power diplomacy, Harrington demonstrates how the ingenuity and hard work of the people at the bottom - pilots, mechanics, and Berliners - were more vital to the airlift's success than decisions from the top.

Harrington also explores the effects of the crisis on the 1948 presidential election and on debates about the custody and use of atomic weapons. Berlin on the Brink is a fresh, comprehensive analysis that reshapes our understanding of a critical event of cold war history.

What listeners say about Berlin on the Brink

Incredible hidden history of how close we came to Soviet takeover of all of Germany and World War III. We were on a knife's edge and the majority of people didn't even know it. I now feel very sorry for Generals and how they get backed into corners.

Not that much drama here. I am used to reading military history books with lots of action. Nevertheless, this book kept me interested throughout. Lots of stuff I never knew before.

Potential to be great but performance a let down

Well researched & interesting account but the bland & monotonous performance made it very difficult to stay interested. And seriously, "Kway Dorsay"?

How the Soviets tried to Strangle Berlin

Berlin on the Brink is an excellent book which gives an in-depth account of the blockade of Berlin.

The book details how Stalin and the Soviets did everything they could to force the allies out of Berlin and how the Anglo-American allies worked to arrest the Soviet influence over the city.