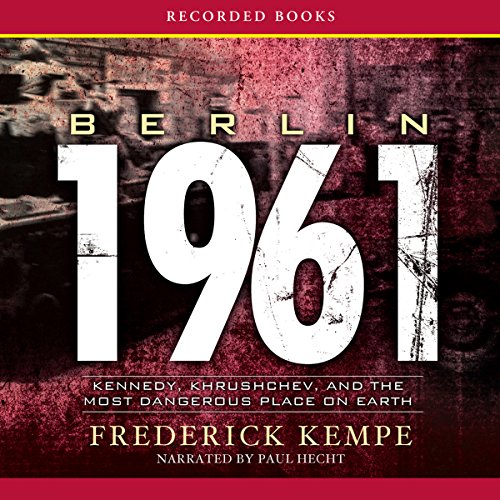 By: Frederick Kempe
Narrated by: Paul Hecht
Try for $0.00

A former Wall Street Journal editor and the current president and CEO of the Atlantic Council, Frederick Kempe draws on recently released documents and personal interviews to re-create the powder keg that was 1961 Berlin. In Cold War Berlin, the United States and the Soviet Union stand nose to nose, with the possibility of nuclear war just one misstep away.

What listeners say about Berlin 1961

I am scared in retrospect

I was living in Berlin as an American military dependent during the time period that this book examines. I was horrified to learn how close we came, those of us living in West Berlin and going about our daily lives, to being vaporized by the Russians. I must have sensed the anxiety because I remember vividly asking my father on a regular basis "If we went to war with the Russians, who would win?" I remember the question. I do not remember the answer. My father was the commanding officer of AFN Berlin, the American Forces Network radio station at the time. We had no TV. We only had the radio. I remember all the circumstances described in the book. I was largely unaware of the context. Indeed, I was in East Berlin on a "tour" with my sister and a Swedish cousin who was visiting, one week before the wall went up. I was actually in Sweden visiting relatives with my parents the day the wall went up on August 13, 1961. I remember vividly the trek thru the Eastern Germany and the Checkpoint like a Hitchcock movie. We hurried back to West Berlin as my two younger brothers were still in the city in the care of a babysitter. My father is no longer alive to discuss these events with me so I only have the memories of the time and the conversations we had about those events. I found this book to be so insightful albeit terrifying. It is so frightening to learn after the fact how close to the front line we were living (for 5 years!) unaware of the danger we were in. Berlin, its charm and its drama had such an effect on all of the Americans that lived through those days that we have "found" each other and formed a group, a collective it you will. The experience defines us like no other experience has. Mr. Kempe did an outstanding job bringing those days to life again.... in all their triumph and fear. Reading the book I felt in a way that family secrets were being revealed. Enjoyed this book immensely and have recommended it hi

Easy to follow and well narrated. A story full of interesting insight with just enough relevant detail to fill up the canvas. A gut-wrenching tale of how close we came to nuclear war. A war prevented in spite of the foibles of men, skewed perceptions of the other, and the chance of history. The wall was an afterthought that came about due to its own momentum. A band-aid that held throughout the Cold War.

Superb in every way

A very well written, and equally well read, telling of the behind-the-scenes facts during a dangerously fascinating time in world history

What did you love best about Berlin 1961?

I was a young child during this time, and didn't know about this. I had heard bits and pieces but nothing as detailed as this.

Have you listened to any of Paul Hecht’s other performances before? How does this one compare?

No, was just amazed that I had never heard the history stated in this way

I give this book a 5 because it sustained an exciting narrative until the final scene. After going over every detail of the building cris over several months the author skips through the climatic showdown rather breezily. The epilogue reveals the authors neocon preferences for how Kennedy should have handled Berlin. Not a neocon myself but respect his points, worthy of debate. Highly recommend this book.

What a terrific revelation of a potentially...

Cataclysmic year. There is so much to appreciate and applaud. The detailed but mesmerizing research, the fair delivery (not absurdly gilded by Kennedy Worship), the book is at once a cautionary tale in dealing with bullies and the much needed indictment - now that we have socialists running for the highest office - of a system that has its aim the subjugation of human excellence...if necessary through government maddened barbarity. As the son of a European immigrant whose family was murdered by Communists this book should be required reading before they head to the polls to vote for leaders steeped i in irresolution or weakness. Excellent!

Well-researched but disorganized and biased

Overall I really enjoyed this book as an introduction to the Berlin Crisis. Being a Cold War kid with a father working for the DoD, a freshman in high school when the wall fell, a family history that includes displacement due to the Soviet regime, the Cold War was a significant presence in my young life and definitely shaped my world view. Further as the son of Boomer parents I only heard warm expressions towards Kennedy.

Mr. Kempe's organization of the book, laid out in the first chapters to describe first the players, then the detailed timeline works for the most part. He outlines his thesis early on that Kennedy's implicit acquiescence to the wall was a mistake. The disorganization comes with the jumping around of the timeline as the crisis unfolds. Dates are clear but jump forward and back, sometimes by several months so it is hard to understand the place in the timeline. Further, Kempe introduces new facts supporting his thesis with regards to Berlin only in the epilogue in connection with the Cuban Missile crisis. And while the character studies, timeline and vignettes were extremely detailed I could have used some fundamental background information with regards to the Berlin situation at the outset, specifically with regards to the four-powers agreement. If you're not already familiar with the agreement you'll need this information.

With regards to the bias, whether or not you agree that the thesis is correct or not, Mr. Kempe makes critical remarks that come across as snarky about Kennedy's character with regards to womanizing, drug use and laissez faire attitude towards Berlin. He makes mention several times of Kennedy in the huge, gold bathtub in Paris making the impression he was there to relax. (Kennedy was in the bath due to his back problems. And Churchill was also known to work from the bath.)

I understand that Mr. Kennedy was not a perfect person (is anyone?) but there is no indication that the womanizing or drug use (for his back) had any affect on his decision-making for Berlin. Was Kennedy unprepared for Berlin and Kruschev? Absolutely. So was the Dept of Defense and State Dept, not having any cohesive stance with regards to Berlin. But this was not Kennedy's fault. This was a failing of previous administrations not understanding that the refuge crisis was growing too large for the Eastern Block to ignore. Was his policy of allowing the Soviets to do what they will with their part of Berlin laissez faire? I don't think so. I believe Mr. Kennedy understood the guidelines he set in Vienna. And I agree that a "wall is better than a war". Kennedy had his eyes on a bigger goal which was avoiding mutual mass destruction in a nuclear conflict. Did Kennedy change his policy between Berlin and Cuba? No, I don't believe he did. Kennedy was a fast learner. His resoluteness with regards to Cuba was not a change of policy but rather a reaction to threat much closer to home, and more thorough understanding of Kruschev through his experience in Berlin. Fundamentally Kennedy did not place the same value on Europe as he did to an existential threat to the US mainland. In my estimation, rightly so. Given Mr. Kempe's background it is easy to see why he might take a more EU-centric view.

With regards to the performance, it was solidly OK. It sounds like a period piece of news being read in the 60s. It is clear and I enjoyed the narrators pronunciation of challenging Russian, German and (one) Italian names. My issue is that there are short sections where it was clearly re-narrated either by someone else or in a different sound studio. The effect is enough to pull you out of the book.

I'll be looking for another book to balance my view of Mr. Kempe's work likely Mr. Taylor's The Berlin Wall: A World Divided once it comes to Audible.

A Tense Moment In History

This was an excellent book with a good history lesson. Up to a point, the book told the story of how we got here. I was intrigued that many in 1961 believed that Germany would never be reunited. Of course, that did not happen. I was also amazed that no one really did anything stupid to start a shooting war. There were many tragedies when the Berlin Wall went up. This occasion separated families and friends. Many escaped the East, but many failed to do so at the expense of their lives. Frederick Kempe has written a great analysis of this time in our history and Paul Hecht does a great job bringing it to life. I highly recommend this book to help us avoid history from repeating itself.

I have an interest in Berlin because of visits in 1979, 1985 and 2016. I saw the wall on the first two visits and studied the history and felt and experienced the two Berlins. I had no idea how complicated 1961 was and how close we were to nuclear disaster. I learned a great deal about President Kennedy and the President of the USSR and their chess moves that might have resulted in World War III.
Hits home how major leaders hold millions of innocent lives in their hands with their negotiations and decisions and power struggles. This book is a valuable history book and I am glad I listened to it.

What happens when you turn a blind eye to evil.

This book should be mandatory reading for all students to graduate from primary education. It reveals clear side by side comparison of socialist vs free market systems and the suffering inflicted by unbridled socialism.