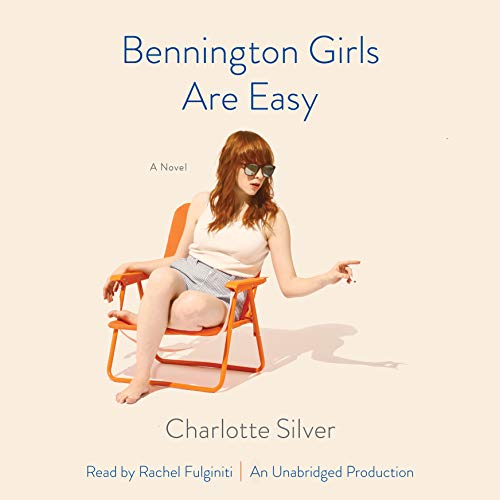 A Novel
By: Charlotte Silver
Narrated by: Rachel Fulginiti
Length: 7 hrs and 48 mins
Categories: Fiction, Contemporary
2.5 out of 5 stars 2.7 (19 ratings)

Charlotte Silver dazzles with a ruefully funny coming-of-age novel that follows two recent Bennington grads who are determined to make it in the Big Apple.

Bennington College, founded in 1932 as a suitable refuge for the wayward daughters of good families, maintains its saucy reputation for attracting free spirits. There, acres outnumber students, the faculty is composed of fading hippies, and clothing is largely optional. Or, as J. D. Salinger put it in Franny and Zooey: A Bennington type "looked like she'd spent the whole train ride in the john, sculpting or painting or something, or as though she had a leotard on under her dress."

Cassandra Puffin and Sylvie Furst met in high school but cement what they ardently believe will be everlasting friendship on Bennington's idyllic Vermont campus. Graduation sees Sylvie moving to New York City, where, later in their 20s, Cassandra joins her. These early, delirious years are spent decorating their Fort Greene apartment with flea market gems, dating "artists", and trying to figure out what they're doing with their lives. The girls are acutely and caustically observant of the unique rhythms of the city but tone deaf to their own imperfections, which eventually drives a wedge between them.

Equal parts heartfelt and hilarious, Bennington Girls Are Easy is a novel about female friendships - how one word from a confidante can lift you up or tear you down - and how difficult it is to balance someone else's devastatingly funny lapses in judgment with your own professional and personal missteps.

"Silver taps into the particular insular culture that stays with the school's graduates - especially best friends Sylvie Furst and Cassandra Puffin - after they leave.... Silver has written a fun read with lots of snarky humor.... A caustically witty novel." (Kirkus Reviews)
"In this wickedly comic, deliciously mischievous and purely pleasurable novel, Charlotte Silver has found the perfect distance and tone, enabling her to mock youth's presumptions, vanities and self-delusions while maintaining overall fondness for her characters. The contemporaneous details are spot-on, the aphoristic wit shrewd and universal. These Bennington girls' follies are recognizably our own." (Phillip Lopate, author of Portrait Inside My Head and Getting Personal )
"In Bennington Girls Are Easy, Charlotte Silver frames the plight of 20-somethings trying to survive in New York with such a witty, poetic eye.... Petty arguments frequently take a surprisingly profound turn in this juicy novel." (Suzanne Rindell, author of The Other Typist)

slow to warm up

This book does jump around, but you get used to the style as you keep reading, or maybe it is easier to digest as an audible book. The story is based on the relationship of two best friends -millenials- who are socialized around wealth, status, and intellectuals. It begins by highlighting the shenanigans of these free spirited besties while attending a liberal arts college out east. From there, they move to the Big City and experience the natural evolution of friendships, relationships, survival, and getting older. Great messages are buried in the book.

a waste of time to listen or read this thing. not interesting at all. :(

I am not sure how this book got by an editor. Nobody speaks like this in the real world.

This book is so stupid!!

Is this book made for stupid people?!? So boring. So silly. Ridiculous character names. Nothing happens!