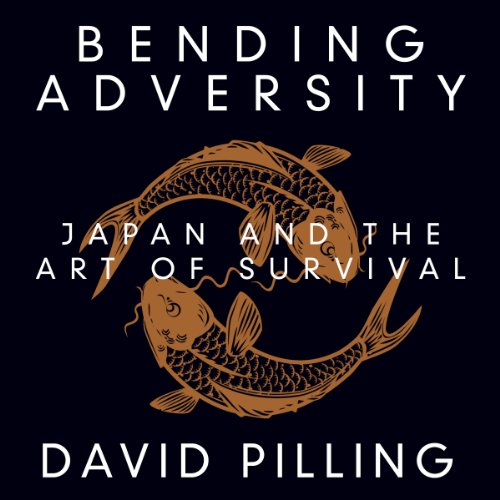 By: David Pilling
Narrated by: Tim Andes Pabon
Try for $0.00

In Bending Adversity, Financial Times Asia editor David Pilling presents a fresh vision of Japan, drawing on his own deep experience, as well as observations from a cross section of Japanese citizenry, including novelist Haruki Murakami, former prime minister Junichiro Koizumi, industrialists and bankers, activists and artists, teenagers and octogenarians. Through their voices, Pilling captures the dynamism and diversity of contemporary Japan.

Pilling’s exploration begins with the 2011 triple disaster of earthquake, tsunami, and nuclear meltdown. His deep reporting reveals both Japan’s vulnerabilities and its resilience and pushes him to understand the country’s past through cycles of crisis and reconstruction. Japan’s survivalist mentality has carried it through tremendous hardship, but is also the source of great destruction: It was the nineteenth-century struggle to ward off colonial intent that resulted in Japan’s own imperial endeavor, culminating in the devastation of World War II. Even the postwar economic miracle—the manufacturing and commerce explosion that brought unprecedented economic growth and earned Japan international clout might have been a less pure victory than it seemed.

In Bending Adversity, Pilling questions what was lost in the country’s blind, aborted climb to #1. With the same rigor, he revisits 1990—the year the economic bubble burst, and the beginning of Japan’s “lost decades”—to ask if the turning point might be viewed differently. While financial struggle and national debt are a reality, post-growth Japan has also successfully maintained a stable standard of living and social cohesion. And while life has become less certain, opportunities—in particular for the young and for women—have diversified.

Still, Japan is in many ways a country in recovery, working to find a way forward after the events of 2011 and decades of slow growth. Bending Adversity closes with a reflection on what the 2012 reelection of Prime Minister Shinzo Abe, and his radical antideflation policy, might mean for Japan and its future. Informed throughout by the insights shared by Pilling’s many interview subjects, Bending Adversity rigorously engages with the social, spiritual, financial, and political life of Japan to create a more nuanced representation of the oft-misunderstood island nation and its people.

“A probing and insightful portrait of contemporary Japan." ( Publishers Weekly, Starred Review)
“A sweeping view of contemporary Japan portrays its complexities and potential for change. The author’s articulate and diverse interviewees—scholars and teenagers, housewives and politicians—vividly and passionately testify to Japan’s cultural contradictions, ambitions and strategies for survival.” ( Kirkus Reviews)

What listeners say about Bending Adversity

Great story, but the narrator was distracting

What did you love best about Bending Adversity?

The author has a detailed understanding of the nuances of modern day Japan.

The performance was awful. The reader tried to add accents to every Japanese word but sounded ridiculous throughout. Sorry for being so direct, but his performance made me cringe every time I listened to the book, even though I found the content very interesting.

The story was interesting. It wasn’t a cliffhanger and it’d be best if you had a very keen interest in and knowledge of Japan before reading the book. I would suggest reading. The narrator- wow -. I think someone with zero understanding of Japanese might not be the best person to narrate a book about Japan. The pronunciation was distractingly bad, to the point I was confused. Multiple times he would pronounce the same word different ways I thought he was talking about different things.

The book itself was very interesting. I'd been meaning to pick it up for a while but had been putting it off, and I'm glad I finally got to it. There were some parts that seemed unnecessarily in-depth (for instance, some of the economic aspects dragged) and other parts that were repetitive (he would reintroduce a subject without acknowledging it as such, which made me sometimes feel like "didn't I already listen to this part?" only to realize it was a new section) but aside from that the book was filled with very interesting, informative content. It was nice to have a book that was about the in-depth political and societal aspects of Japan, unlike the pop-culture which is usually so prevalent. I feel like I have a much stronger understanding of Japan's political and economic culture after listening to this.

However, as others have stated, the narrator was a somewhat uncomfortable experience at times. As someone who is studying Japan, it was irritating to hear the important political names pronounced in a way that was almost beyond understanding--which prevented me from being able to link my previous understanding of Japanese politicians with certain sections of the book. Almost all the Japanese words were terribly mispronounced (and even some of the English words). I would recommend finding readers at least somewhat coached in subject language of the books they're reading. It can make for a much more pleasant, less cringe-inducing experience for those truly interested in the material.

Chapter 13 starts from the middle...

Very good book. Just wondering what I've missed in the part that was cut off. I hope not too much.

This book was well written and informative about non pop culture Japan and the issues it's facing. It was a fairly objective view of history, crisis and current issues.

In the past couple of years my work has involved some travel to Japan. I've found a general scarcity of books on present day Japan-- most titles are about War World II. I found this book highly informative and it made me re-think many preconceptions I had about Japan. This is the best non-fiction I've found on present day Japan.

The narrator was okay. At the beginning I found his voice monotonous, but I did become used to it and finished the book.

Good writing and matched my experiences of Japan. However, I did not care for the reader. If I was not stuck on a plane I would not have finished listening to it.