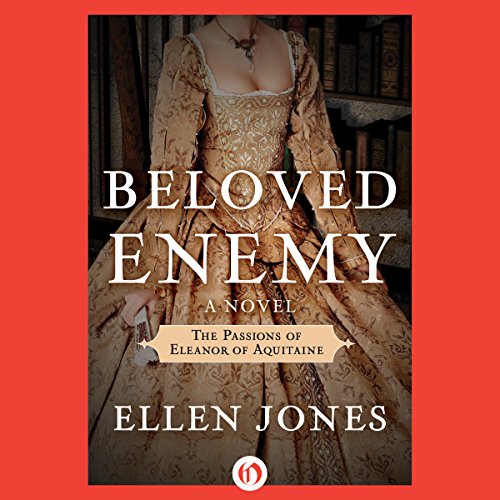 By: Ellen Jones
Narrated by: Robert Blumenfeld
Try for $0.00

Set against the turbulent backdrop of 12th-century Europe, as two countries compete for world dominion, one woman will take her destiny, and the future of a nation, into her own hands.

"Aquitaine is mine. It will never belong to anyone else."

With these words, 15-year-old Eleanor seals her fate. Aquitaine is under the French king’s safekeeping, and Eleanor, the Duke of Aquitaine’s eldest daughter, knows she must wed Prince Louis in order to insure the future of her beloved duchy. Fiercely independent, filled with untapped desire, the woman who would be queen must provide Louis VII, her monkish husband, with heirs. But it is young Henry of Anjou who catches Eleanor’s eye - and sets fire to her heart.

Ruled by a raging drive to succeed, Henry vows that he will not be cheated of his rightful place on the English throne. Yet the newly christened Duke of Normandy is thoroughly enraptured by the French queen. In Eleanor, Henry knows he has found a woman whose hunger for life and glory matches his own. So begins a passionate love that will span decades and change the course of history.

What listeners say about Beloved Enemy

Such an incredible period of history

What made the experience of listening to Beloved Enemy the most enjoyable?

I knew so little about the 11th and 12th Century England and France and I found Ellen Jones' novel gave incredible insight, background and became a bridge to what eventually lead to War of the Roses, Henry VIII, and Elizabeth's reign.

What other book might you compare Beloved Enemy to and why?

This is a different century, but I would compare it to "White Queen" and many of Phillipa Gregory's books...which I also love. Such strong female characters in a time when men ruled in so many ways.

Have you listened to any of Robert Blumenfeld’s other performances before? How does this one compare?

I was not particularly impressed...I had to get used to him. My wish is that Allan Corduner had narrated this book. Corduner's work on The Book Thief was so brilliant that's he's hard to beat for me.

Excellent fascinating look into Eleanor of Aquitane's life and loves, and what that century's history foretold. I'd recommend it to those lovers of historical novels and English history.

If you could sum up Beloved Enemy in three words, what would they be?

Entertaining novel. True Eleanor fans might or might not appreciate the inclusion of all the medieval gossip and conspiracy theories.

This is the worst narration I've come across. His tone is droning.

What character would you cut from Beloved Enemy?

The narration ruined this book for me

No vocal inflection. Sounded like he was trying to race through it as fast as he could. Book was hard to get through due to the narrator. It should be re-recorded with someone else.